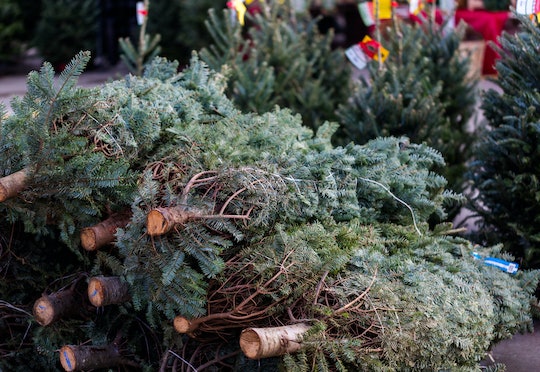 Getting it home was a hassle, but you know that your tree — whether it was a pre-cut or something you chopped down yourself — is pretty much the centerpiece of the holiday. If you're doing Christmas on your own for the first time, or made the switch from plastic to live this year, you may wonder how long will your Christmas tree live. Obviously you want it to last as long as possible (or, at least by the time Boxing Day rolls around) but you also don't want it to be a potential fire hazard. There's something about a living room fire that doesn't necessarily scream out "Merry Christmas."

There are a lot of variables you'll want to consider before you buy your Christmas tree. Although a lot of people don't really think about the kind of tree — I mean, as long as it looks good, why bother getting into the biology of it, right? — it's something you should consider, along with factoring in your own schedule of how and when you'll be maintaining the tree between now and Christmas. There's a lot that goes into making sure your tree is as "alive" as it can be.

(Of course, the tree dies right then and there, when it's separated from its roots. But when I'm talking about "tree death," I mean the moment in which you have more needles on the floor than on the branches itself.)

Another important aspect? The amount you water your tree. Although the tree is no longer alive, it still needs water to stay fresh — pretty much like the cut flowers you buy at the store. According to Pfaff's Christmas Trees, a newly cut tree will drink about a gallon of water 24 hours after being cut.

If you get a pre-cut tree, you might not know when, exactly, it was cut. According to Martha Stewart Living, you'll be able to get a good idea on freshness by seeing if a lot of needles fall off after touching it — if it's a noticeable amount, you'll want to look elsewhere for a tree, since the selection from that lot might not last through the holidays.

Since there's a chance that your pre-cut wasn't chopped down within that same day, Purdue noted that you'll want to take it home and take about a half of an inch off the bottom to make sure your tree will remain fresh. Otherwise, it won't take in any water.

With the proper maintenance above, Purdue noted that a cut tree should last about four weeks inside your home. That's why you'll want to get it after Thanksgiving, but preferably at the start of December. If you don't put up and decorate your Christmas tree immediately after buying it, it'll last longer if it's stored in a cool area, and not an area with direct sunlight. I imagine you'll want to decorate ASAP — since it's the fun part — so any talks of temporary outdoor storage probably aren't a huge concern.

The more you care for it, the longer it'll last. Make sure to hydrate your tree often, and keep tabs on its water supply. That way, your Christmas tree will stay gorgeous until New Year's Day.