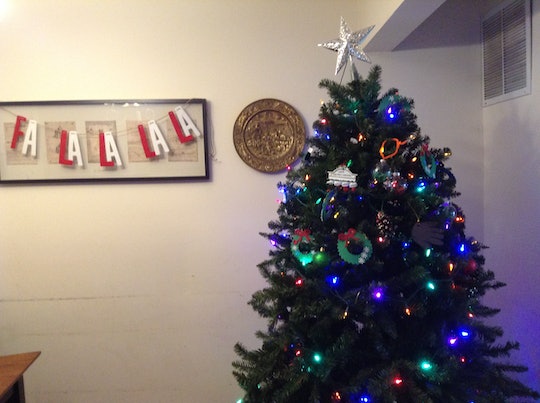 I Let My Kids Decorate The Christmas Tree, & Here's How It Went

As a kid, my favorite part of decorating for Christmas was putting up the tree. The December I was pregnant with my twins and stuck on bed rest, I spent hours gazing at my meticulously decorated Christmas tree, imagining what it would be like to decorate it with my own kids one day. Our kids' first Christmas was a spent in a sleep deprived fog, and last year they were far too interested in scaling the furniture to make erecting a tree a good idea. But this Christmas, my boys are almost 3 years old and finally mature enough to understand what all the Christmas fuss is about.

While they listen better than they did a year ago, the terrible twos are very real, so I knew there was still a fair chance that the Christmas tree would be seen as a potential jungle gym. Rather then put the tree up after they fell asleep, I thought the best chance at avoiding a mishap would be to let them take control of decorating so they felt invested in keeping it in its proper upright position.

With the Elf on the Shelf as my witness, I forked over control of the tree and let my toddlers take the reins. Would I be able to handle having my ornaments scattered haphazardly? Would they try to throw the balls at each other rather than hang them? Does getting young kids involved in decorating the tree keep them from destroying it?

Here's what happens when you let your kids decorate the Christmas tree.

If No One Ends Up In Stitches, It'll Be A Christmas Miracle

When buying ornaments for the tree or receiving them as gifts throughout the years, I've always focused on what the ornament looks like or symbolizes, not how likely they are to break or how much of a choking hazard they pose. But as a parent, I view them very, very differently than I once had.

I was looking forward to a teary moment watching the boys hang the beautiful ornaments friends and family have given them and us, but as we went through the boxes we began to realize how many Christmas ornaments aren't kid friendly. Porcelain and glass may look gorgeous aglow with lights, but they are also trips to the E.R. waiting to happen.

I thought I solved the problem when I found a bag of shatter-resistant plastic ornaments, but even those are hung with metal wire hooks, perfect for ingesting or poking out your brother's eye. (Aka "playing," as my sons call it.) Suddenly those handcrafted glitter pinecones and paper snowmen of my early childhood made perfect sense. Luckily we have a pine tree in the backyard and I still have all the glitter from my Britney Spears-wannabe days, so after an hour of crafting we were in business.

Beauty Is In The Eye Of The Beholder, I Guess

My partner and I both have type-A personalities. Before we became parents, we made the tradition of putting up the Christmas tree a grand affair. We'd make special snacks, open a bottle of wine, put on some carols, and spend the entire evening transforming our tree into a masterpiece.

I knew handing the reins over to the kids would lead to an imperfect tree, but I was unprepared for their insistence on trying to cram all the ornaments onto a single branch.

With some gentle encouragement, the boys spaced out the ornaments a bit along the bottom branches, and I put a few of the more delicate ornaments I really wanted on display towards the top of the tree, where they're much safer. The midsection of the tree is Switzerland, a large, blank neutral zone that only contains lights. There have been some disagreements since the tree went up over where certain ornaments should go, and as the kids fought over the ornaments along the bottom of the tree, I moved others up and out of reach. The overall effect is that most of the ornaments look as though trying to escape the house via the star on top.

My boys tried hard, but this tree is not gracing the cover of any magazines any time soon — if not ever. Oh, and it's not even getting posted on Instagram either. I'm not sacrificing likes for this. It's a tree only a mother could love.

Adults trim the tree and cross it off the holiday to-do list, but my children view the Christmas tree more like a modern day living art installation. At least once a day one of them walks up to the tree, tilts their head to the side in quiet contemplation, and pulls off a plastic ball, only to place it approximately two centimeters to the right. It's tough work.

Toddlers apparently have very flexible ideas as to what constitutes proper tree decor, and I can't say I blame them. We have ornaments of all sorts: classic orbs, cartoon figures, photo ornaments, a tiny Starbucks cup. So I can see their logic as they shove random toys and stuffed animals into the Christmas tree.

My husband was less amused when they hung his car keys on the tree, but 'tis the season for creativity.

The Battle Over The Star

I have fond memories of crowning the Christmas tree with the star as a little girl. My mom would pick me up and I was thrilled by how different my familiar living room looked from above. My younger sister and I would battle for the right to place the star on the top of the tree and although we were supposed to alternate who got the honor each year, we still fought over the job until one of us gave in to the other.

In the Christmas books my kids have been reading they always "oooh" and "ahh" whenever they see the star on the top of a Christmas tree, so I was prepared for a squabble over which one of them would get the honors. I thought I was being clever by letting them both have a turn putting the star on top, but I underestimated them, because they both know the golden rule: He who touches the star last wins. Since we put the tree up, there's been an ongoing game of capture the star, and I'm always the loser.

After they managed to grab the cord that lights up the star and pulled it down for the third time in a week, I had a mini-meltdown where I threatened to call Santa Claus and tossed the star on top of refrigerator. The tree looks even more like a sad Charlie Brown tree without a star on top, but it's worth it to not have them fighting. Perhaps the Elf on the Shelf will bring the star back in time for Christmas Eve, but no promises.

This Tree May Never Come Down

While I hoped being a part of the tree-decorating team would make the kids happy, I didn't anticipate that they'd come to view the Christmas tree as a close personal friend. They run up to the tree to give spontaneous hugs to the branches, arrange pillows on the floor to lay down and look up at the lights, and say, "See ya later, Tree!" when we head out of the house. It's adorable for sure, but it's also got me dreading their reaction once it's time for the tree to come down.

Do I take down the tree under cover of night or let them watch while I pull their new pal apart and stuff his body parts into a box? The Elf on the Shelf gets a cute little poem about flying back to North Pole until next December, but I don't know what cover story I can concoct to explain away the tree-shaped body bag in the basement.

Should You Let The Kids Take Over The Tree?

Letting the kids decorate the Christmas tree was a great exercise in letting go of my fantasies about how the holidays should look and living in the reality of now. I may not have gotten my Christmas card-inspired tree, but I honestly love how it looks because it's an honest reflection of my family.

Although having a Christmas tree up with young kids underfoot has definitely added to the household chaos, I'm still really glad we didn't skip it this year. Who knows, maybe this is the start of an entirely new family tradition. Perhaps next year I'll kick back with a homemade hot cocoa and let the kids decorate the tree again.

More Like This
12 Helpful Tips For Hiking With Kids
15 Adorable CoComelon-Themed Costumes You Can Buy Or DIY
6 Mindfulness Activities For Kids
What Age Do Kids Start School? Here’s What You Need To Know