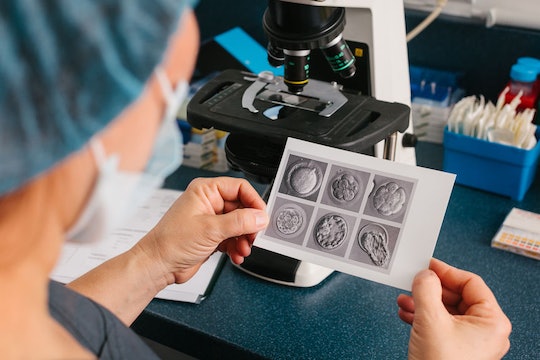 If You're Doing IVF, Don't Expect To Implant All Your Eggs At Once

When it comes to in vitro fertilization (IVF), there's no one reason why people pursue this particular path to parenthood. But whether you're struggling with infertility or you're starting a family with the help of a sperm donor, you'll likely have many of the same basic questions: What does the process entail? What are the odds you'll be successful? Do you *have* to give yourself shots at home? How many embryos are inserted during IVF, anyway?

If you've spent any time watching reality TV over the past 10 years or so, then you probably know that occasionally, a round of IVF can result in rather a lot of babies (think Jon & Kate Plus 8). That doesn't always happen, clearly; but even if your personal life, you've probably noticed that there are more twins on the playground now than there were before IVF was fairly commonplace. But why does this happen some times and not others? I remember coming away from a conversation with a friend shortly after Jon & Kate premiered with the vague understanding that the average IVF procedure involved the implantation of eight to 10 embryos, but in most cases, only one or two survived.

Neither my friend nor I had any firsthand experience with IVF, I should point out — a fact that should be abundantly clear momentarily. Because I reached out to Dr. Vitaly A. Kushnir, Reproductive Endocrinology and Infertility Specialist with Neway Fertility in NYC, to find out what an expert had to say about the number of embryos implanted during a typical IVF session... and let's just say the answer is way less than 10. As with so many things, it all depends on the person.

"The stage and number of embryos recommended for transfer is individualized based on the patient’s history, age, number and quality of available embryos," Dr. Kushnir tells Romper.

"The goal is to maximize pregnancy chances while minimizing risks of complications related to multi-gestational pregnancy."

The transfer of embryos usually happens either three days after fertilization (the cleavage stage) or five to six days after (the blastocyst stage), explains Dr. Kushnir. In the majority of patients, a "fresh transfer" is recommended. If you're undergoing preimplantation genetic testing (PGT), however, or produce a larger number of eggs than most people, your doctor might recommend freezing the embryos and transferring them in a subsequent menstrual cycle.

As for how many embryos, the number is likely lower than you think: "Typically in good prognosis patients a single embryo transfer is recommended," says Dr. Kushinir, "while in patients who are older and/or have a poor prognosis, transfer of multiple embryos may be recommended."

Of course, the implantation of multiple embryos means there's more of a chance of multiple births... and not just a little bit more, either, according to BabyCenter: The odds that you'll have twins (at least) after multiple embryo insertion are as high as 20 percent. That might be okay with you, but it's worth pointing out that multiple pregnancies come with an increased risk of miscarriage and pre-term labor.

Then again, IVF treatment is more likely to result in twin or triplet births even when only one embryo is transferred, so one embryo doesn't necessarily mean you won't get more than one baby — and researchers didn't know why until fairly recently, as BioNews reported. A Japanese study found several factors that increased the risk of multiple births from a single embryo during IVF: the use of blastocyst culture (when embryos mature in a lab for several days prior to implantation); assisted hatching (when a small hole is made in the layer of proteins surrounding the embryo to assist in attachment to the uterine wall); and the use of frozen (thawed) embryos instead of fresh embryos.

When you consider how many people freeze their embryos for use at a later date, that alone would seem to account for the increase in multiples over recent years. Not that all of those embryos are being inserted at once... I know better than that, finally. Although, you never know, because everybody is different.

And that would appear to be the real answer. To most things.