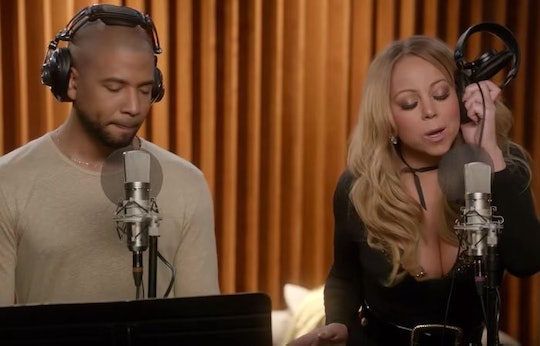 How Many 'Empire' Episodes Is Mariah Carey In? She's A Huge Guest Star This Season

Whether you like her high-pitched vocals and inability to age or not, it’s actually surprising that it’s taken Mariah Carey this long to guest star on Empire. To date, the show has had appearances by artists like Pitbull, Alicia Keys, Snoop Dogg, and Kelly Rowland, but Carey has been absent from the series until now. But how many episodes is Mariah Carey in Empire Season 3? While it would be totally okay to have her peppered in throughout the entire season, it looks like her character is only going to serve her purpose in just one episode. Now, that doesn’t mean that she can’t come back later, as we’ve seen some of the guest starring artists and actors do, but for right now, Carey is scheduled for one episode of Season 3 of Empire, which is slated to air on October 5.

But how is she going to fit in with all of this Lyon family drama? The show has never been short on the dramatics and craziness, but Carey’s character is going to do something better than add to that. It seems like she’s going to be used as a way to get Jamal back into singing and excited about his career again. And no, it won’t be by sleeping with him, even though we know Carey is totally okay with younger men, even if that is a thing of her past. Ahem, Nick Cannon, we’re looking at you.

Carey is reportedly going to play Kitty, a successful singer probably in the caliber of Carey herself, who records a new song with Jamal. This seems like it’s going to be one of those cases where a celebrity plays a fictional character, but also kind of plays themselves in a roundabout way, but with a show like Empire, we can forgive them, since Carey playing herself would actually make perfect sense too.

Now, that’s not to say that Carey has had the most expansive or successful acting career, since we will never forget her starring role in Glitter, and we won’t even go there. But her acting chops aren’t what’s going to matter when Carey guest stars on Empire this season. The important thing is that her character is going to make music with Jamal and get him out of his depression and funk created when he was shot last season. And understandably, Twitter is freaking out.

Obviously some of the most important things going on this season are going to be the fate of both Anika and Rhonda, and also Lucious’s FBI agent surprise half-brother (I can’t even with all of this soap opera drama right now), but Jamal’s recovery is equally as important, since music has been his driving characteristic since the beginning of the show. Empire returns on September 21 and Carey’s episode will air on October 5 on FOX.