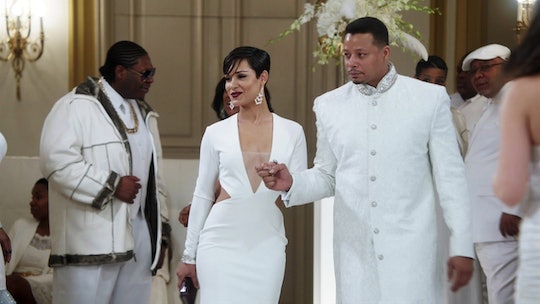 Lucious & Anika Got Married On 'Empire' & The Internet Is Freaking Out

Well, no one can say Empire is predictable. During the show's season finale on Wednesday nights, fans were expecting Hakeem and his short-time girlfriend Laura to say "I do." But instead, Lucious and Anika got married on the Empire finale, causing many fans to scream some choice words at their televisions and on social media.

OK, let's be honest. Very few people, if any, actually wanted to see Hakeem and Laura get married. Not only have they just started dating, but they aren't even old enough to drink at their own reception. But when fans were told there would be a wedding, many had hoped Lucious and Cookie would tie the knot (again.) As Lucious said, these two are ride or die. They will always love and be there for one another, even when they're stabbing each other in the back.

But alas, it was Anika "Boo Boo Kitty" Calhoun who got to walk down the aisle. Though, it's important to note that this marriage wasn't out of love. Moments before the original bride Laura was set to walk down the aisle, Anika was served papers that required her to testify against Lucious in court. And why does Anika need to testify? Well, having dated and worked for Lucious for a number of years, she's privy to all of his illegal wrongdoings.

Before being served, Anika was worried that she'd have to testify against her former fiancé and the current grandfather to her child. So naturally, she thought the best solution was to jump off a building. Luckily, the Lyons were there to talk her off the edge and convinced her that she wouldn't have to testify. But hey, even Cookie can't be right all the time.

Once Anika was actually served papers, Lucious came to the quick realization that she wouldn't be forced to testify if they were married. And since they already had a marriage license from their previous engagement, it could be done quickly. Of course, no one on or off screen was pleased with this decision. Cookie was clearly upset that the man she loved was marrying someone else, and refused to go to the ceremony. Jamal was quick to pint out how sick the situation was, and Hakeem wasn't too thrilled that his father would be marrying his baby mama.

But still, no one was quite as upset as the people of Twitter. Many were quick to point out how this union would complicate the family tree.

Others thought this was just another manipulative move from Anika.

But overall, people were flat out pissed.

But don't count out a Cookie and Lucious wedding yet. If Rhonda lives on Empire, then Anika will be out of the picture for good and we can forget that The Red Wedding: Part 2 never happened.