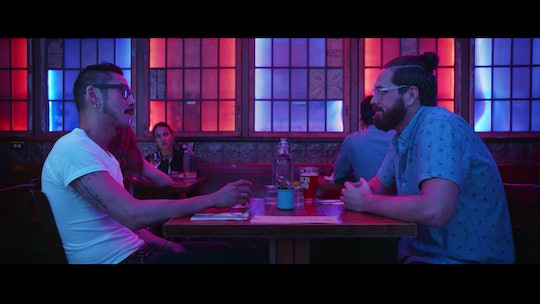 Netflix has covered comedy, romance, true crime, and even post-apocalyptic worlds. Now, Dating Around is about to be the streaming platform’s first effort at a reality dating series by showing modern blind dating. Although the trailer makes it look like it was filmed with a lot more quality shots than your average dating reality show, the cast is made up of people going on real dates. If you’re wondering how many episodes Dating Around is on Netflix so you can watch it all in one day, you’re in luck.

The first season has six episodes which are each less than 30 minutes long. So instead of shelling out too much money in a crowded restaurant for Valentine’s Day, you can plop yourself down on the couch and watch six singles go on five dates each to find a lasting relationship (or at least someone to go on a second date with). In the Dating Around trailer, you can see a few dates that the singles go on to find their Mr. or Mrs. Right. And, as to be expected, they aren't all gems.

During one date, a single says, "I’m like the goodie girl. I’ve never done a drug. And you?" Her date replies with a smile, "Yeah, I love them."

In another shot, one couple is shown kissing on the sidewalk, so it’s probably going to be a case of some successful dates and some duds — kind of like dating in the real world.

At a time when shows like The Bachelor and The Proposal sometimes make dating about the competition rather than two people actually falling in love with each other, Dating Around is a refreshing take. There are no elimination rounds or group dates. There’s no pressure of proposing to someone at the end of the season. Instead, each episode follows one single as he or she goes on five blind dates with five different people. To be clear, I don't have anything against The Bachelor and you will find me watching it religiously every week. But it was probably time for something with a fresh perspective on dating in real life.

Dating Around executive producer Chris Culvenor told Vanity Fair that the point of the show is to give viewers a look at what dating is really like.

"This isn’t a quest to find necessarily the love of your life, who you’re going to marry," he said. "This was really just an honest snapshot of what that experience is like. It can be fun. It can be awkward. It can be interesting. It can sort of change who you are."

Culvenor said that during the four months it took to cast for Season 1, he made it a point to find people who were really looking for romance and the chance to date rather than those looking for their 15 minutes of reality TV fame. "This wasn’t about spending two months living in a house together trying to find your soulmate to propose to. This was really, what we’re attempting to capture is an honest look at what the experience of dating is like," he explained.

Dating Around just dropped on Netflix today, so there’s no word yet if there will be a Season 2. But it might be the reality show you didn't know you needed from Netflix. It already seems like it’s a lot more realistic and grounded than some other reality dating shows and since each episode stands on its own, there’s no pressure to watch it all in a hurry. Though if I’m being honest, that’s totally what I’m going to do.

Whether you’re single or you’ve already found someone thanks to your own bouts of blind dating, Netflix's Dating Around is definitely a dating show to add to your watch list.