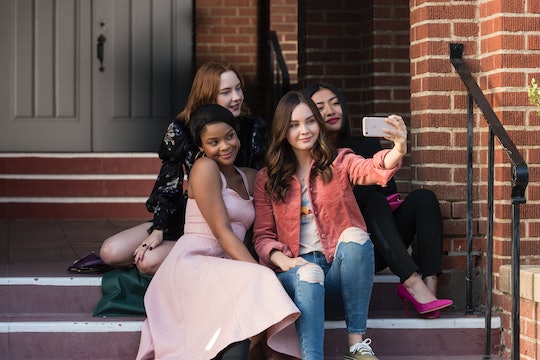 'Light As A Feather' Is Hulu's Newest Horror Series

I don't know anyone who watched The Craft in their youth and didn't try to play the Light as a Feather, Stiff as a Board game directly after. I know a handful of people who also swear they actually felt the person levitate beneath their fingertips. Whether or not the game actually works, Hulu’s horror series of the same name is about to make a whole new generation want to play. But how many episodes is Light as a Feather? Season 1 is 10 episodes and it received a direct to series release, meaning that all episodes are released at once on Oct. 12. It's unclear if the show is meant to be a limited series or eventually lead to a second season, but if there are any characters left alive by the finale, you’ll know there’s potential for that.

It's kind of an urban legend at this point, but many claim that the game actually does work. And even if it doesn't, it's all just harmless fun. Not in the show, however. In Light as a Feather, things turn sinister when the kids who play the game start dying off one by one.

The best part about other streaming platforms is being able to watch all episodes in one season in one sitting if you want to. So it’s probably the best time of year for Hulu to adopt that system with at least one show, being that it is a horror series. Brent Rivera, who plays Isaac on Light as a Feather, said during the red carpet premiere that the show is a fun watch for horror fans. "I think it's just kind of spooky, it kind of keeps you on your toes," he said. "I think it's just a great overall Halloween series."

Although the game in the show is based on a popular party game that’s been around for decades, the actual story behind Light as a Feather is based on a Wattpad story of the same name by author Zoe Aarson. So in case you want to spoil the series for yourself before starting in on those 10 episodes, you can read all 26 parts online first. And Haley Ramm, who plays Violet in the show, told Spoiler TV that there are "endless possibilities" with the show thanks to the story. So I definitely wouldn't count out a potential Season 2, even if the majority of the teens end up dead by the end of Season 1.

Light as a Feather does seem a little reminiscent of lesser known horror movies like Ouija or Truth or Dare. They aren't exactly box office dominators and they typically feature MTV or CW network actors, but they’re still usually good for a few jump scares and make for an easy watch. If that’s the case with Light as a Feather, then I will probably be marathon watching the entire first season until I’m ready to go to bed with all the lights on. And with the entire first season being released less than three weeks before Halloween, it's the perfect time to get scared in the comfort of your own home.