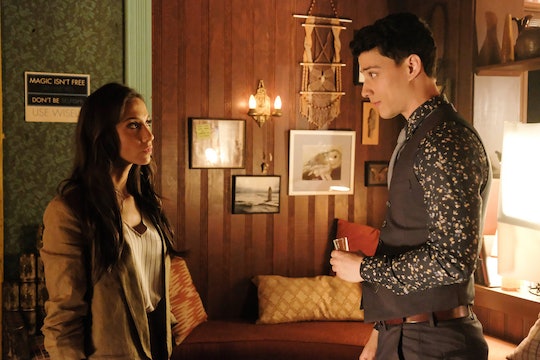 'The Magicians' Season 4 Will Answer Some Important Questions

Things are about to get a lot darker before they get better on The Magicians Season 4. When fans last saw the magic-wielding heroes, they'd lost their memories and were given new identities. Going into the new season, it could feel like a whole new show with what are essentially brand new characters. Obviously Quentin and the rest of the magical Scooby gang will return to their former selves at some point, but The Magicians Season 4 has 13 episodes to get them there.

The season will likely start off with the students still without their powers, as seen in the final moments of Season 3. This definitely switches things up in a way they haven’t been before and Eliot, the only one who hasn't been given a new identity, has been possessed by a demonic Big Bad set to get ample screen time this season. The Magicians co-showrunner John McNamara told Entertainment Weekly that it’s a little unnerving having all of the main characters in such vulnerable places going into Season 4.

"It’s scary having one of our regular cast be the villain, with his own life hanging in the balance. This is a really, really out-of-control villain who could do almost anything," McNamara said. "At the same time, what was scary was the cliffhanger of no one knows who they are. They’re all completely different people. We kind of knew at the end of season 3 where we were gonna go and we kind of were winging it a little bit, but that’s the fun of the job."

Viewers will still see the core cast as they’ve known them, but from the outside, other characters will see them in their new identities, which were given to them for their own protection. Margo is now Janet, a fashion editor. Josh is now Trevor, a five-star Uber driver, of all things. Quentin is Brian the English professor, which isn't a huge stretch for the guy. Most surprising of all is probably Penny as DJ Hansel.

I don't expect these new identities to stick, but as it's for their own protection this season, fans are probably in for several episodes of their new personas before anyone gets their powers back. Despite the inevitable confusion from the characters and viewers alike, there will be some answers that fans were left wondering about at the end of Season 3.

Arjun Gupta, who’s played Penny in all forms on The Magicians, told Den of Geek that Penny won't be the only one to find himself this season. He revealed that by Episode 6, Penny will finally have some answers to why he’s here and where he fits in, which I’m sure some fans have been waiting on for a while now. Gupta also said that Julia, while left without powers like the rest of them, is still indestructible, which will have her eventually wondering what her place is in all of this too.

13 episodes might not seem like enough time to introduce these *new* characters on The Magicians or to get through their own struggles as powerless normals with a demon after them. But somehow, all of the past seasons have managed to get through and tie up each storyline by the end.

Since this is new territory, however, I wouldn't be surprised by another big cliffhanger like that of Season 3. Not only do Quentin and the rest of them have to somehow get their memories back, but they also need powers and the ability to save Eliot while also defeating the demon who possessed his body. Like I said, it's a lot for one season. Somehow, I think it will work out for most of them.