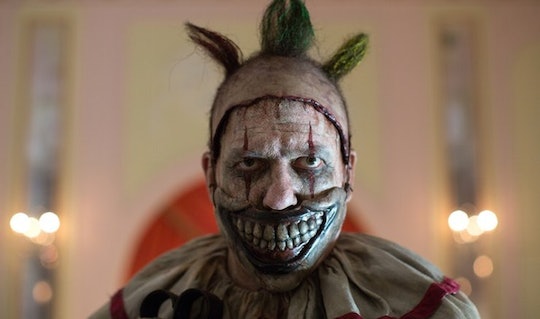 Twisty's Time On 'AHS: Cult' Isn't Over With Just Yet

Dedicated American Horror Story fans know Twisty from his days of murdering the townspeople and carnival folk of Jupiter, Florida during AHS: Freak Show. But in the Season 7 premiere he made another appearance. In a crossover of sorts, Twisty popped up in Ozzy's comic book meant to retell his story from years ago. But since he’s one of the more notable killers from the show’s past, fans are already wondering how many episode Twisty is in on AHS: Cult. The famous clown, still played by John Carroll Lynch, was featured in the premiere episode to kick off the season (as if there weren't already enough terrifying clowns in the episode), but it doesn’t look he’ll be prominently featured throughout the rest of the season, unfortunately. (Or fortunately, depending upon how you feel about murderous clowns.)

In the promo for Episode 2 of AHS: Cult, he’s shown in Oz’s bedroom, likely a figment of the kid’s imagination or a result of his night terrors because of the amount of creepy clowns he’s heard about and seen in the neighborhood himself. But beyond that, Twisty might be taking the backseat to some of the other clowns set to terrorize and murder on AHS: Cult this season. In fact, Lynch’s IMDB page only has him listed as Twisty for the Season 7 premiere, even though the previews show him in Episode 2 of Season 7 as well.

Since AHS: Cult was announced to be a season grounded in reality more than any other season before it, having Twisty appear over and over will have to be more about being in the imagination of Ozzy or while he’s reading his colorful Twisty book, and you can only do that so much before it becomes strictly fanfare.

Luckily, there are enough creepy clowns and even creepier unmasked characters this season (like Kai, for example) to keep things scary, and as much as any avid AHS watcher might want more Twisty this season, it doesn’t seem like he’ll be appearing much beyond Tuesday's episode. In an August Q&A in L.A. for AHS: Cult, Ryan Murphy revealed that since Twisty is such a big part of the creepiest big bads from the past several seasons, he’ll always have a place in the series in some capacity.

"As for Twisty, he was always one of our mythological monsters, along with Bloody Face and Rubber Man, and... Piggy Man," Murphy said at the Q&A. "All of those characters come and go within the cycle of the show. And I love John Carroll when he plays him, and he was willing to do a couple of episodes for us because he loved that character."

Since those "couple of episodes" might just be the first and second of the season, though, fans can probably expect to be scared by the jaw-less toothy clown once more before he’s run his course for the season.