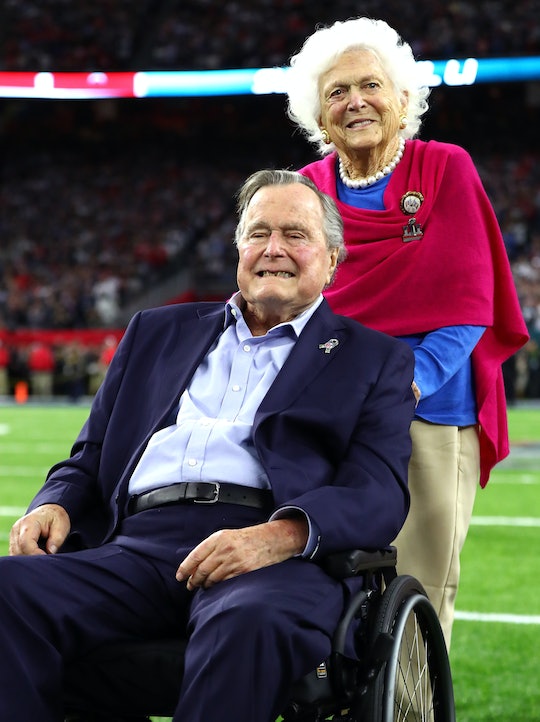 Former first lady Barbara Bush passed away at the age of 92 on Tuesday, surrounded by her family in Washington, D.C., according to ABC News. President George H.W. Bush's wife leaves behind a significant legacy, and in more ways than one. People may be wondering how many grandchildren Barbara Bush had, as her family is undoubtedly mourning its matriarch right now.

She and George H.W. Bush's oldest child was, of course, President George W. Bush, who became the 43rd POTUS. George Jr. and his wife Laura Bush have two children — twins named Jenna Bush Hager and Barbara Bush, who was named after her grandmother. Jenna has two daughters, who were the late Barbara Bush's great-granddaughters, named Mila and Poppy.

Their next eldest child was Pauline Robinson Bush, who was known as Robin. Robin passed away of leukemia when she was just under 4 years old, as reported by The Washington Post. The Bush family understandably faced a lot of heartbreak and struggles while dealing with her death, according to the outlet.

Shortly before Robin passed away, the Bushes welcomed their second son, Jeb, who you may remember from his 2016 presidential campaign. Jeb and his wife Columba Bush, have three children — George, Noelle, and John Ellis (aka Jeb Jr.). George (how does this family keep track of all the Georges?), and his wife Amanda have two sons, Prescott and John, according to CNN. Jeb Jr. and his wife Sandra, have two daughters, according to The Washington Post.

The rest of Barbara and George's kids steered clear of politics. Their son Neil Bush, a businessman, and his first wife Sharon have three kids together: Lauren, Pierce, and Ashley, as noted by The Washington Post. Lauren, who is the CEO of FEED Projects, has one son named James, and another on the way, according to Women's Wear Daily.

Next up is Marvin Bush, who remains largely out of the spotlight. Marvin and his wife Margaret Conway adopted two children, Marshall and Charles, as noted by Verywell Health.

The office of President George H.W. Bush released a statement on Tuesday confirming that Barbara Bush passed away. Bush had been struggling with congestive heart failure and chronic obstructive pulmonary disease, as reported by ABC News. According to the outlet, the statement read:

A former first lady of the United States of America and relentless proponent of family literacy, Barbara Pierce Bush passed away Tuesday, April 17, 2018, at the age of 92.

Earlier this week, as Barbara Bush's health continued to ail. Jim McGrath, the couple's spokesman, released a statement celebrating Barbara Bush's strength throughout the decline of her health:

It will not surprise those who know her that Barbara Bush has been a rock in the face of her failing health, worrying not for herself -- thanks to her abiding faith -- but for others ... She is surrounded by a family she adores and appreciates the many kind messages and especially the prayers she is receiving.

It's clear that Barbara Bush was so loved by her family, and the large brood she left behind will undoubtedly honor her legacy.