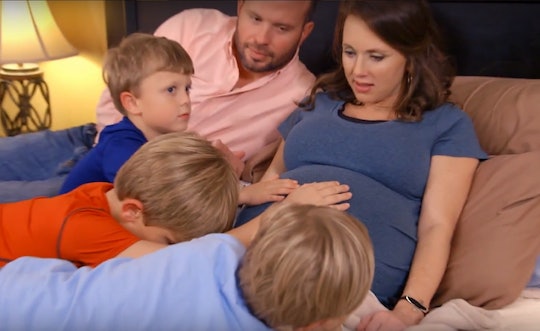 The Waldrops Wanted A Big Family — And They Got Their Wish

As a mom to one very spunky and outspoken 5-year-old, I can't imagine what my life would be like with another baby in the house. So I can't even begin to fathom what Sweet Home Sextuplets stars Eric and Courtney Waldrop’s lives are like now, with six new babies to take care of on top of the other children they already had. So how many kids do Courtney and Eric Waldrop have? The Sweet Home Sextuplets family has a full house, to say the least.

According to People, Eric and Courtney were already parents to 8-year-old Saylor and 5-year-old twins Wells and Bridge before Courtney got pregnant with the sextuplets. Despite already having three children, Eric and Courtney seem ready to take on their new role as parents of nine (nine!). "It’s an amazingly joyful feeling to have all six babies at home with us," they told People back in February. "Our lives have been forever changed. We are blessed beyond words and so excited to get life started with these sweet little miracles from above."

Since Courtney had already given birth to their twin boys years before the sextuplets came, she was on specific fertility treatments thought to lessen the chances of having multiples. It’s unclear which medications Courtney was on, but Clomid and Serophene are typical fertility drugs that can lead to multiple births from a single pregnancy. Even though six at once wasn't their plan, the Waldrops seem to have embraced it completely. And for them, it was a long road to another successful pregnancy.

Before getting pregnant with the sextuplets, the couple underwent several fertility treatments and tragically suffered several miscarriages. Sweet Home Sextuplets starts more than a month before Courtney delivers the babies at 30 weeks, so viewers really will get to see it all unfold on camera. Including how the couple adjusts going from a five person household to an 11 person household.

"A first for the network, we began this journey with Courtney and Eric even before the sextuplets arrived, when they already had three boys in their brood," TLC president and general manager Howard Lee said in a press release. "Our viewers get to see exactly what it’s like to experience such a life-altering moment in its entirety, going from a family of five all the way through expanding to a family of 11."

As to be expected, not only is the introduction of six new babies going to be an adjustments for parents Eric and Courtney, but also for their boys. In the Sweet Home Sextuplets trailer, Courtney voices her concerns over making sure the boys feel that they’re still getting the right amount of attention, even with the new babies in the home. But the boys themselves are more concerned with keeping their hands clean of any poop explosions and I am so with them on that one. "I am not gonna change any diapers because they’re stinky," one of the twins says in the promo.

Like the shows that came before it, Sweet Home Sextuplets is another docuseries about a big family and the challenges that the numbers themselves bring. It’s likely going to be a huge adjustment for all involved, but it's kind of amazing to be able to watch it every step of the way.