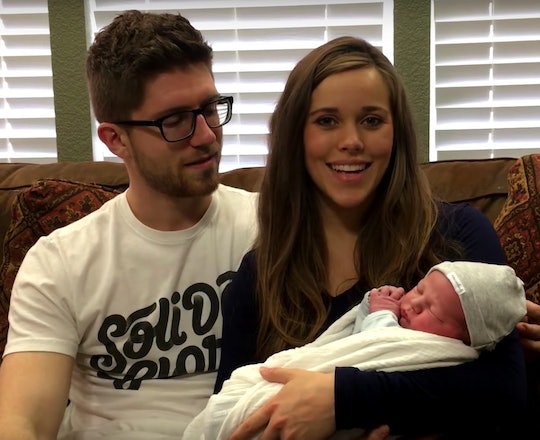 Jessa Duggar grew up surrounded by brothers and sisters, as documented on the TLC phenomenon reality TV show 19 Kids and Counting. The show ended in 2015, and now the 24-year-old is building a family of her own. After she and husband Ben Seewald welcomed a new son last week, fans of the spinoff in which she stars, Counting On, are getting restless to know whether her kids will one day have as many siblings as she does. But when you consider how many kids Jessa Duggar actually has, it's clear that she has a long way to go before she reaches that level.

When Duggar had her baby boy Feb. 6, her older son, 15-month-old Spurgeon, became a big brother. "I think it's really awesome that we have two little boys so close together in age," Duggar said in a TLC interview shortly afterward, her new son — on whose name the couple had not immediately decided — in her arms. "I know they're going to be best friends and love growing up and doing everything together, so I'm looking forward to seeing that."

But she has certainly not ruled out the possibility that there may be some even younger siblings joining in on the fun one day — in fact, she and Seewald have indicated that there more than likely will be.

In May, Duggar told Us Weekly that she and Seewald plan to one day adopt in order to fill out the "house full of kids" she has said she would love to have. "We have many friends who have walked this road, so we have seen firsthand the amazing power of adoption," she said, according to the magazine, adding that her husband has jokes about having 15 sons. "There are so many kids out there who are longing for the love of a family, and we feel strongly about opening our hearts and our home to welcome them in."

The original Duggar clan is so large because Duggar's parents subscribe to the "spiritual belief that couples should have as many children as God blesses them with," as CNN's Lisa Respers France wrote. While Duggar has said that she will likely raise her kids differently than her own mom did in some respects, she did not specify whether that extended to how many children she would have. Neither Duggar nor any of her brothers or sisters are adopted, for example — and the definition of a "house full of kids" is certainly a loose one.