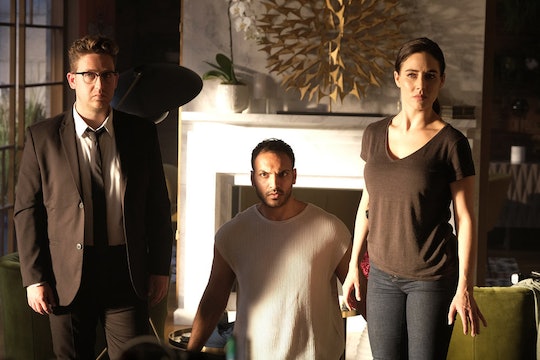 'The Magicians' Novels Set A Solid Foundation For The Syfy Series

Before Quentin was enchanting viewers on Syfy’s The Magicians, readers got to know him and his Brakebills classmates in the book series. Like so much choice content on TV and in movies, The Magicians began as books, which later inspired the series that recently began its fourth season. But how many Magicians novels are there? The book series, written by Lev Grossman, began in 2009 with The Magicians: A Novel, which continued in 2011 with The Magician King, and concluded in 2014 with The Magician’s Land. There’s no word on whether or not Grossman plans to revive the book series now that the trilogy is complete, but those three books definitely gave the series a lot of material to work with in the first few seasons. Now, there are little details and storylines that even the author himself is surprised by.

In the first book, Julia isn’t as much of a main character as she is in the second. In the show, however, she’s shown as a pivotal character early on, even though she doesn't get into Brakebills. Grossman told Inverse that the change surprised him, but overall, he’s happy with the way the series has progressed, as it has veered off course from the Magicians novels.

"I wanted to see The Magicians as a TV show rather than a movie because there were so many things I wanted to get to in the books but couldn’t," Grossman said. "When I sent them off to Hollywood, I didn’t want to see the books smooshed into two hours. I wanted to see them expanded into dozens of hours."

He added that it’s only natural for the series to add more depth to the characters and storylines since books can only do so much in the pages allotted. Although some fans of the books might prefer those to the series and vice versa, both versions have been successful in their own right.

The Magicians novel sets things up for the trilogy overall. It introduces Quentin, the school, and all of the important players. Unlike the Syfy series, however, the books begin with high school aged characters rather than 20-somethings trying to figure out this whole magic thing.

The Magician King focuses more on Julia than the first book. It explains how she learned magic outside of the school setting and finds Quentin and Julia in Fillory together. The book ends with Quentin returning to Earth alone. In the show, Quentin finds himself in Fillory a lot earlier on, so it's not a huge reveal in the show when the magical land is presented like it might have been for readers.

The last book in the trilogy, The Magician’s Land, picks up where the second book left off and follows Quentin as a Brakebills professor. Quentin ends up creating a new magical realm which he finds out is actually connected to Fillory, where Julia has become queen of the dryads. The TV show is grounded in the real world as much as the books, but it has already burned through a lot of material from the books. Now, the goal seems to be to continue on with the same beloved characters with new storylines, given that the source material is essentially used up.

Since the Magicians novels and the TV show are so different from each other, it still might be worth it to give the books a shot if you’ve only been a show watcher so far. Like The Walking Dead, The Magicians as a book series and as a TV show have their differences, but offer the same core story. Just because The Magicians breezed through the events of the books, both versions of the story are just as exciting.