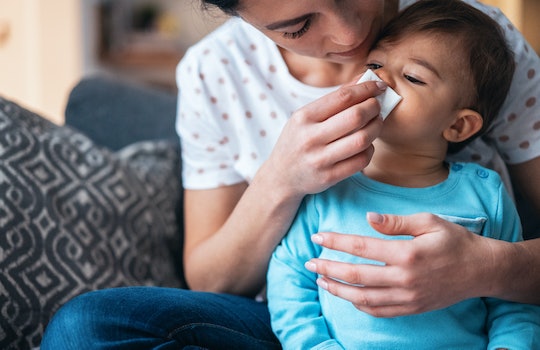 It may be the start of the new year, but we’re not out of flu season yet. Far from it. That pesky bugger of a virus continues to creep its creepy crud across the nation like some sort of zombie that just won’t die. But how many strains of flu are there this year?

More Like This
Therapist Says: Alone Time For Moms Is A Necessity, Not An Indulgence
If A Tick's Head Gets Stuck When You're Pulling It Out, Here's What To Do
Pool Cannonballs Are Pretty Much A No-Go During Pregnancy
Could Increased Anxiety Mean You'll Go Into Labor Soon? Experts Explain

“Nationally influenza B/Victoria viruses have been reported more frequently than other influenza viruses this season followed by A(H1N1)pdm09,” explains Pauley. But, but, the virus varies by region and age group.

All those stats have you feeling sick? Take a tour of the CDC’s additional age data found on FluView Interactive to really ramp up your hypochondria. Reach anxiety attack-levels by taking a dive into the regional and state level data about circulating influenza viruses that can found at the same site.

We kid, of course. Rather than freak out about potential illnesses, the best thing you can do to prevent any one of the seven circulating flu viruses is to take the necessary precautions, like wash your hands and remind your kids to wash their hands. Keep communal spaces clean. Avoid sick friends and family — that means maintaining a three to five foot distance from people coughing or sneezing near you. Avoid sharing food. (Yes, we know your runny-nosed child’s chicken nuggets do look oddly appealing in the glow of the kitchen light, but for the love of all that’s holy, just say no.) And do your best to get adequate rest. As tough as that may sound, a strong immune system is built on a foundation of sleep so catch as many winks as you can.

And, of course, we’ll channel your mother here and say: Don’t forget to get a flu shot. While vaccines can’t guarantee you won’t get the flu, the CDC reports that you are “about half as likely to get sick as someone who was not vaccinated.” We don’t know about you but when you consider a week spent squatting over a toilet boil vomiting while your toddler tries to braid your hair because “You’ll look so pretty like Elsa, Mommy” (yes, this really happened), those odds sound pretty good.

Scott Pauley, Press Officer for the Centers for Disease Control and Prevention