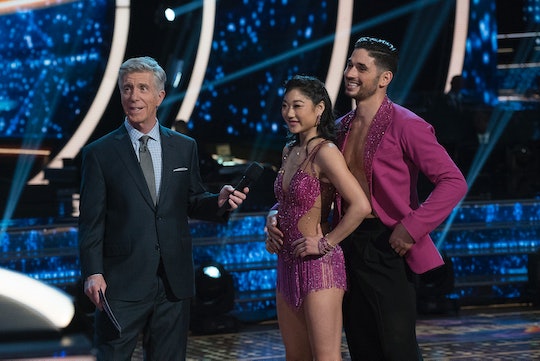 'DWTS: Athletes' Will Be The Shortest Season Ever

When Dancing With the Stars Season 26 premiered, fans noticed right away that not only are some of the pros absent, but the list of contestants is smaller than usual. That's because this will be a much shorter season too, but how many weeks is DWTS: Athletes? The pressure is on for the contestants currently completing on the competition show, especially since Season 26 is just four weeks long total. And since the premiere has already come and gone, that means there are just three weeks left. Now, that also means three two-hour episodes and plenty of dance routines filled into each installment, but still that doesn't feel like nearly enough time to watch these athletes discover their hidden dance talents. Basically, this season will be over before you know it.

With less time to really hit their respective strides, the athlete contestants of DWTS Season 26 have been forced to give it their all right from the start, with essentially no room for error. In the past, contestants have had several weeks to get into a groove and get the hang of being on the show, but for DWTS: Athletes, it's a more fast-paced and high pressure situation than ever. Yes, there are still four weeks total to work toward earning the Mirror Ball trophy, but in the grand scheme of things, that feels like nothing. As a viewer, it also feels like nothing because it means less time to watch some of these athletes continue to absolutely kill it on the ballroom floor as they've been doing already this season.

Since this is already the beginning of the end of the season, you can't help but wonder who is going to win. If the season premiere episode told us anything, it's that there are already some extremely talented stars competing this season, even if they've only had one dance routine so far to prove it. That being said, there is some speculation that real-life best friends and former Olympic teammates Adam Rippon and Mirai Nagasu might end up being the final two this time around. Nagasu did say as much during the season premiere, even if it was meant half-jokingly. But given their scores (Rippon received a combined 24 and Nagasu a 23), it’s not currently out of the realm of possibility for the two figure skaters to be the final two contestants left standing.

Then again, Jimmy Kimmel has already made his official DWTS winner prediction with Washington Redskins player Josh Norman as his top pick. "This is year is probably the toughest year yet because every dance is an athlete, so I really had to do my homework," the host said on Jimmy Kimmel Live! following the DWTS premiere. In the past, he's predicted a handful of other winners and in general, it's kind of his thing to predict the winners and finalists for shows like The Bachelor and DWTS, but with Norman’s 24-point dance with pro partner Sasha Burgess, Kimmel might not be too far off this time either.

Even though DWTS: Athletes is just four weeks long, this was probably the best cast of contestants to have a shorter season with anyway. In any season, the competition is fierce and intense, but with a group.of experienced athletes, that air of competition was bound to be even stronger. So in a way, if there was ever a group of DWTS contestants who needed to give it their all right away, then these athletes are perfect. However, it's going to be interesting to see which of these athletes has what it takes to really make it to the very end.