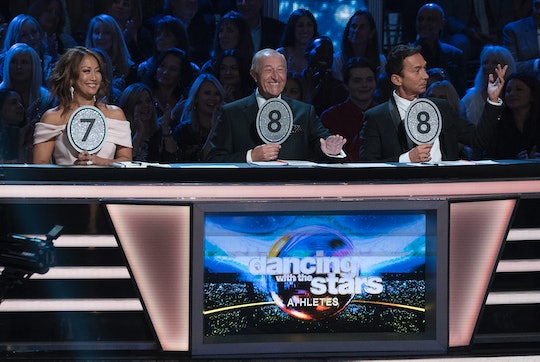 The 'DWTS' Season 26 Finale Will Be Here Way Too Soon

Now that the premiere of Dancing With the Stars’ first ever all-athlete season has come and gone, it’s time to take a step back and look at the remaining contestants to try and figure out who will really be here for the long haul. And by long haul I mean the next three episodes, since it’s just a four-episode season, which is probably why viewers are likely already asking when the DWTS Season 26 finale is. It's coming up sooner than you may think.

Of course we would all love a full-length season of Adam Rippon dancing to more numbers like RuPaul's "Sissy That Walk" and totally killing it out on the ballroom floor. However, this is a special season, which means that it’s also special in terms of its length. The DWTS Season 26 finale will air on May 21, which is basically as close as it feels. That’s just three weeks away, which means that in the time between the season premiere and the finale, these contestants need to be constantly bringing it. There is little room for error and if contestants are going to be voted off in pairs, much like the premiere episode required, then they’re going to have to work even harder than some of the contestants of the show’s past. I know, no pressure, right?

Usually, DWTS premieres twice per year — once in March and then again in September with at least 11 episodes. This time around, the reboot of American Idol took precedence though and slid into the Monday time slot typically used for DWTS. Instead, the all-athlete season was born and premiered at the end of April. And it was impossible to allow the dancing competition show to span longer than four weeks because of the May 28 premiere of The Bachelorette Season 14.

So far this season, some of the contestants have already proven themselves to be interesting and talented enough to make fans wish that the athlete season was a lot longer than the allotted four weeks. From Rippon’s already epic first dance routine on the DWTS season premiere to Josh Norman’s dance with pro partner Sharna Burgess that earned him a score of 24 out of 30, there are already plenty of athlete’s who have proven that they have some moves. The season is short, yes, but like past seasons of DWTS, there's still two-hour episodes each week to give most fans their fill of emotional backstories and somehow amazing foxtrots.

Since the DWTS Season 26 finale is just a few weeks away and will air before the month of May is over, there’s no time like the present to speculate on who will win the Mirror Ball trophy and who might get voted off the show next. Like I said, all of the contestants are going to have to do their very best from here on out, especially since there are just three episodes left of the season total. It definitely increases the stakes tenfold, but it also makes the season more exciting overall, since each week another super talented contestant, or contestants, will be eliminated.

Originally, the spring 2018 season of DWTS was going to be replaced by a spin-off, Dancing with the Stars Junior, which would feature famous kids, a whole new panel of judges, and younger professional dancers as the pro partners. Somewhere along the way, however, the plans for the spin-off series were scrapped (or at least put on the back burner) and instead of not having a season of DWTS at all, the athlete season was announced. And so far, it’s lived up to the hype.