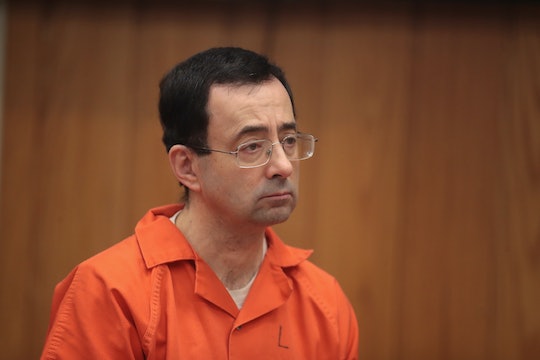 In 2017, USA Gymnastics team doctor and Michigan State University osteopathic physician Larry Nassar pleaded guilty to seven counts of criminal sexual assault after more than 200 young women came forward accusing the doctor of sexual assault over the past 30 years. Now, HBO documentary At the Heart of Gold is set to go into further detail about Nassar’s crimes and the aftermath of his sentencing. But how many years was Larry Nassar sentenced to? At the Heart of Gold describes his crimes in detail and features testimonies from some of his victims.

Lee Carr, who also directed HBO’s Mommy Dead and Dearest, interviewed several coaches, athletes, and lawyers who all know something about the case in order to shed even more light on Nassar's crimes and his subsequent punishment. Shortly before he was convicted of multiple counts of sexual assault on minors, Nassar was found guilty of possessing 37,000 images related to child pornography and a video of himself molesting underage girls and sentenced to 60 years in federal prison for that alone. In addition to that, after being found guilty of the seven counts of sexual assault to which he pleaded guilty, he was sentenced to 40-175 years in prison.

After announcing his sentencing in 2018, Judge Rosemarie Aquilina told Nassar, "I've just signed your death warrant. I find that you don't get it, that you're a danger. That you remain a danger."

More than 200 women spoke out during Nassar’s trial about the ways in which they had been sexual assaulted as his patients over the years. Olympic gold medalist Aly Raisman was one of the many who read statements at his sentencing and spoke directly to her abuser in court.

"We, this group of women you so heartlessly abused over such a long period of time, are now a force, and you are nothing," Raisman said. "The tables have turned, Larry. We are here. We have our voices, and we are not going anywhere."

Some of Nassar's victims claimed that US Olympic Committee and Michigan State University had consciously swept their concerns under the rug long before Nassar finally had his day in court. One of his victims, Amanda Thomashow, said in court that she went to authorities at Michigan State University to file a report against Nassar, but was told that she "did not understand the difference between sexual assault and a medical procedure."

Around the time of Nassar’s sentencing, USA Gymnastics removed itself from its partnership with Karolyi Ranch, where much of the abuse had taken place over the years. But the damage to Nassar’s hundreds of victims is something that will stay with them for the rest of their lives.

Although Nassar’s sexual assault charges were able to give strength to some of his victims to come out and read their own victim statements in court, he might not have finally been convicted of his heinous crimes had it not been for former gymnast Rachael Denhollander, who came out with her own story against Nassar in 2016 in the Indianapolis Star. From there, more victims began to come forward and it wasn't long before Nassar felt the weight of his decades of crimes on his shoulders.

Because of Nassar’s prison sentences, he won't be eligible for parole for 99 years, however it’s a question of whether or not spending the rest of his foreseeable future is even enough to pay for the damage he inflicted on countless women. No amount of years behind bars can undo what he did to his many victims over the years, but At the Heart of Gold is helping to keep their stories alive and their voices heard.