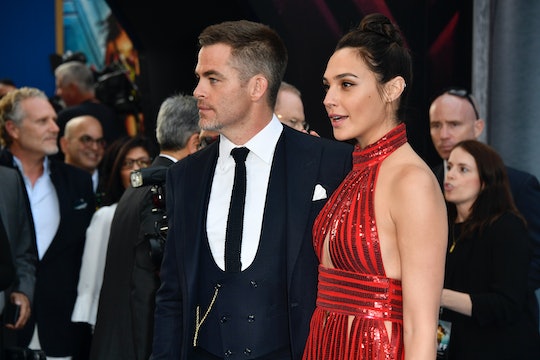 It's hard to believe there was a time, a very recent time, when nobody had really heard of Gal Gadot. When the general public wasn't losing its collective mind talking about her unparalleled performance as Diana Prince/Wonder Woman in the film of the same name, hailing her as the hero the world has been needing for some time. But the reality is, Gadot is relatively new to the whole Hollywood scene. And apparently, her paycheck for Wonder Woman is evidence of that fact. While she earned a paltry (by Hollywood standards) fee for the movie, Gadot's Wonder Woman co-stars could have earned significantly more for the first film based on their previous Hollywood experience alone. (Romper reached out to Warner Bros. for comment on the cast's reported salaries, but did not hear back immediately.)

While the internet was abuzz on Tuesday with news that Gadot earned significantly less than her male superhero counterparts like Henry Cavill (who played Superman), it turns out her salary was on par with industry standards for superhero paychecks. Because that's the world we live in now. In 2014, it was reported by The Daily Dot that Gadot had signed on to star in three Wonder Woman movies for the shockingly low sum of $300,000 per film. Forbes went on to announce that Cavill had earned a whopping $14 million to play Superman. It turns out, that sum was based on royalties Cavill earned after the fact, royalties which will also be available to Gadot now that Wonder Woman is so obviously way cooler than Superman. (No offense, Cavill.)

Because neither Gadot nor Cavill were household names when they signed on to play superheroes, their salaries were actually relatively similar; Buzzfeed reported that Cavill earned around the same amount as Gadot. Although to be perfectly fair here, Gadot had already proven her mettle playing Wonder Woman in Batman vs. Superman. (Cavill's co-star, Amy Adams, who played Lois Lane in Man of Steel, reportedly brought in a seven figure paycheck because she was already a known entity to audiences, in case you were wondering.)

The same holds true for Gadot's co-stars; Robin Wright, who played Wonder Woman's warrior aunt/trainer, has a long history in Hollywood (most recently as the indomitable Claire Underwood on House of Cards), while Gadot's co-star Chris Pine (who played Steve Trevor) became a household name as Captain Kirk in the successful Star Trek reboots. While neither Wright's nor Pine's salaries for Wonder Woman have been made public, they are both heavy hitters in general; Pine reportedly earned $6 million for the fourth Star Trek movie. Wright has made her efforts for equal pay on the set of House of Cards public (Kevin Spacey reportedly earns $500,000 per episode, while she was being paid $420,000 per episode). It's highly doubtful either of these actors would be willing to sign on for the same pay as Gadot.

Now that Wonder Woman has raked in an impressive $570 million worldwide, perhaps Gadot will see some nice, fat bonus checks in her mailbox. Because $300,000 does feel awfully low for a superhero of her caliber.