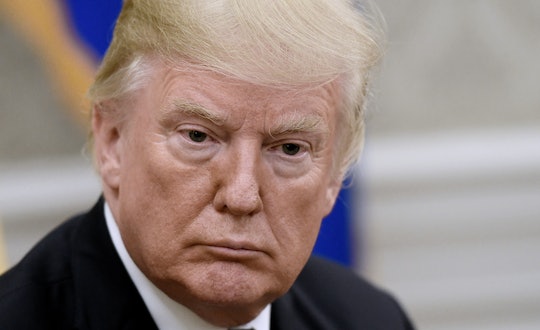 Here's How Much Did The NRA Donated To Trump

On Monday, President Donald Trump gave an address on the Las Vegas shooting on Sunday night that left at least 58 people dead and more than 515 people injured, according to The New York Times. The address, though measured, failed to address gun violence as well as the disturbing trend of mass shootings in America. In a time when America needs to have a conversation on gun safety legislation more than ever (this is the deadliest mass shooting in modern American history, after all), Trump's seemingly calculated silence on gun violence has many people wondering, how much did the NRA donate to Trump?

In April, just a few months after Trump became president, he gave a speech to the NRA that firmly cemented his alliance to the organization and gun rights groups. Trump said, according to PBS:

You have a true friend and champion in the White House.

Trump's sweeping message of assurance to the NRA was a big deal, especially since he was the first sitting president to address the NRA since 1983, according to NPR. If anyone was surprised by Trump's speech at the time, they shouldn't have been — it only made sense that Trump would give a glowing address to the organization that donated about $21 million dollars to his presidential campaign, according to NBC News. According to The Trace, that figure of $21 million is the highest amount of money the NRA has ever spent on a presidential candidate, and it spent a record-breaking $36.6 million on the election in total. An NRA official told Politico during the height of the 2016 presidential race that Hillary Clinton had to be "defeated at all costs."

The notion that the NRA played a big part in Trump getting elected is undeniable when you look at the numbers. Most of the money the NRA spent on Trump's campaign went to political advertisements, and in October 2016, the organization bought its most expensive pro-Trump ad to date. The ad in October cost a staggering $6.5 million, according to The Washington Times, and the pricey ad undoubtedly helped sway countless voters to Trump's side. Jennifer Baker, spokeswoman for the gun rights organization’s political division, said of the NRA's campaign advertisements, according to CBS News:

We’ve done our advertising a little bit different than in the past We’ve really tried to touch voters outside of that group who may be on the fence.

In August 2016, the NRA launched an ad attacking Hillary Clinton outright, a spot of airtime that cost $3 million. The ad painted Clinton as an elitist politician that would leave America "defenseless," according to HuffPost.

A lot of people say they’re not going to vote this November because their candidate didn’t win; Well, I know some people who won’t be voting this year either. Hillary as President? No thanks. I served in Benghazi. My friends didn’t make it. They did their part. Do yours.

In addition to the expensive ads tearing down Clinton, the NRA donated millions in pro-Trump materials and endorsements. In total, The Trace determined that "through October 11, the NRA had spent $12 million attacking Democratic nominee Hillary Clinton and $9.6 million backing Trump."

If you read through the transcript of Trump's Las Vegas address, it's clear that he remains strongly aligned with the NRA, especially when you consider that his message did not reference the topic of gun violence once. No matter where you stand politically, one has to wonder how it's possible to address a mass shooting without also addressing the need for better gun safety legislation, to some degree. Avoiding the topic of gun violence following a mass shooting is as mind-boggling as it is incredibly frustrating.

Oh, and if you think Trump will suddenly address the need for better gun safety laws amid the public outcry, those odds are slim.

The president is clear that he’s been a strong supporter of the Second Amendment.

Although Trump did support President Barack Obama's call for better gun safety laws following the 2012 shooting at Sandy Hook Elementary School in Newtown, Connecticut, it's clear his allegiance now lies with the NRA and not with terrified and outraged American citizens, and it's not difficult to see why.