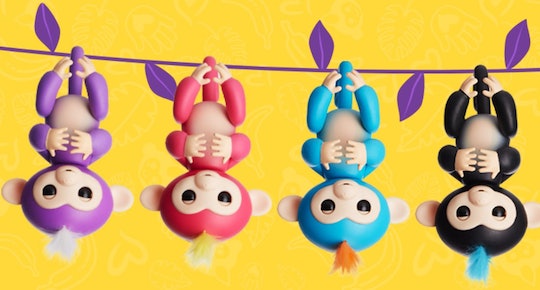 Fingerlings Won't Cost You An Arm & A Leg, But You'll Want To Buy Them ASAP

Just in time for the holiday season that is slowly but surely encroaching upon us, there is indeed a new toy craze. If your kids haven't come home from school demanding Fingerlings just yet, they will. So how much do Fingerlings cost and how hardcore is this new obsession going to be?

For the uninitiated, Fingerlings are not deliciously small potatoes you can roast for dinner. They are exactly what they sound like: Tiny robot puppets your kids can put on their fingers. Yes, they hang on your fingers, which means you're going to be seeing a lot of them. It's going to be a rough toy trend to get through, but the Instagram and Boomerang potential for Fingerling toys is pretty high — so at least there's that to look forward to.

Fingerlings are made by WowWee and they started as adorable little robotic monkeys and have scaled up to also include the very rare, often sold out unicorn version. They only retail for about $15 at major toy retailers like Toys "R" Us, which seems appropriate.

But there's a catch, as always. Because of their desirability and verified "hot toy" status, some of them are sold out (like Gigi the Unicorn), so you might have to get on a waiting list or shell out a few more bucks on sites like eBay.

The purple Fingerling monkey named Mia, for example, will sell for around $20 from third-party sellers while the item is out of stock at your local toy retailer. Decisions, decisions.

Fingerlings aren't exactly new. The animatronic monkeys that hug your fingers and respond to voice and touch have been around for some time. But like any trend, they made their way through the underground playground scene so that by the time the unicorn was "quietly released," as CNN Money put it this week, demand was already very high.

Parents have been posting their Fingerlings woes to the company's Facebook page, lamenting empty shelves and crazy prices on third-party seller websites. If last year was all about Hatchimals, it's clear that this holiday season is not going to be complete without a Fingerling.

Here's the thing, though. Fingerlings are sort of adorable. (No? Bear with me here.) So far, there are just a few in the squad so it won't cost you a fortune to round out your kids' collections. Unless, that is, they really catch on and go all Beanie Baby on the world, then you're basically screwed). Right now, in addition to Gigi the Unicorn, there are Bella, Boris, Finn, Mia, Sophie, and Zoe — all adorably weird monkeys with Troll-like mohawks.

Again, though, they're already popular enough that they're selling out. Amazon is coming through, though, with a few exclusive Fingerlings to be released in November. One of them is a millennial pink Fingerling named Rose, complete with sparkles and a "bonus blankie," that you can nab for just, nope, wait, she's sold out. (Cue the shaking fist at the internet overlords.)

Juli Lennett, toy industry analyst at The NPD Group, told CNN, "It’s brand new this year and it seems to be flying off the shelves. I think that could potentially be one of the top toys for the holiday season.” Um, yes, they most definitely are the hottest thing right now.

The good news? On some level, you can't hate a super hot holiday toy that retails for under $20. If anything, it means that the price can only go up so high between September and the peak holiday gifting time. That being said, it might be smart to order (or pre-order) one or two now so that you know you're set come December.

At the very least, you know someone will buy it back from you if your kids lose interest in the next few months. Though the way these things are catching on, might as well think of it as an investment.