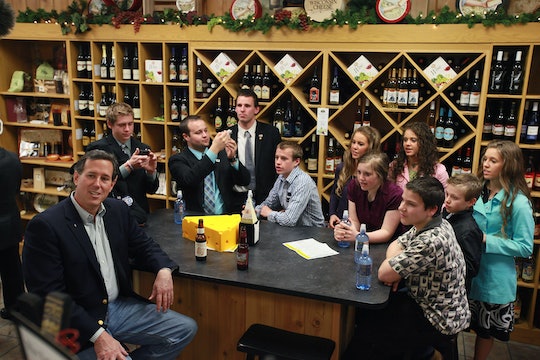 How Much Do The Duggars Make Per Episode Of 'Counting On'? They're Making Good Money

Raising a kid is expensive. I only have one son, so I know my financial burn isn't as great as millions of parents who spend tens of thousands of dollars a year on their children. Personally, I wouldn't want to see the expense bill for Jim Bob and Michelle Duggar and their 19 children. But the cost of child-rearing has gotten me thinking: How much do the Duggars make per episode of Counting On? According to Hollywood insiders, it seems to be a good chunk of change for only a few days of work.

The dollar amount, though, is only speculation. According to E! News, reality producer Terence Michael estimated back in 2009 that TLC budgets about $250,000 to $400,000 for each episode, of which reality-show families receive about 10 percent. If that amount hasn't fluctuated since the Duggar's first TLC reality show, 17 Kids and Counting Days, aired in 2008, that means they would've earned millions.

In fact, the website Celebrity Net Worth put the Duggar family's net worth at $3.5 million. But that money has to be split among dozens of people. More than 19 people to be exact: Jim Bob and Michelle, and their children, Joshua James, Jana Marie, John-David, Jill Michelle, Jessa Lauren, Jinger Nicole, Joseph Garrett, Josiah Matthew, Joy-Anna, Jedidiah Robert, Jeremiah Robert, Jason Michael, James Andrew, Justin Samuel, Jackson Levi, Johannah Faith, Jennifer Danielle, Jordyn-Grace Makiya, and Josie Brooklyn. So I could imagine the return from filming Counting On or any of the shows that came before the spin-off may not be as high as a single number would suggest.

Also, filming the TLC show is not the only way members of the Duggar family earn money. For example, Duggar sisters Jill, Jessa, Jinger, and Jana co-authored the book, Growing Up Duggar, which was published by Howard Books three years ago. Jill Duggar Dillard and her husband Derek Dillard also solicit donations to the Dillard Family Ministries to support their missionary work, which was once embroiled in controversy over a misuse of funds, according to Hollywood Take.

Supplemental incomes are actually typical for people who star on reality television shows, according to Business Insider. Many reality stars earn cash through other businesses, licensing deals, book contracts, appearances at events and the like, and advertisements.

Only a handful of reality TV stars and television hosts actually make tens of millions of dollars for one season of a show, Business Insider reported. Count Gordan Ramsay and Ryan Seacrest among the lucky few.

But the Duggar family does seem to earn enough from the show and various other revenue streams to live a relative life of luxury. According to In Touch Weekly, Jim Bob and Michelle Duggar own a private jet plane. They were also able to foot the bill for their son, Joseph, and his new wife, Kendra Caldwell, to fly to Greece for their honeymoon.

It's not exactly known how the Duggars split their per-episode earnings. Although the Duggar family net worth may be more than $3 million, the individual Duggar family members seem to be worth far less financially. According to one estimate, Jill Duggar Dillard's net worth is $400,000. The net worth for her sister, Jessa Seewald, is around the same amount.

Still, $25,000 to $40,000 is still a good chunk of change to earn for working only a handful of days, no matter which way you splice it. After all, that's far more than people make in six months.