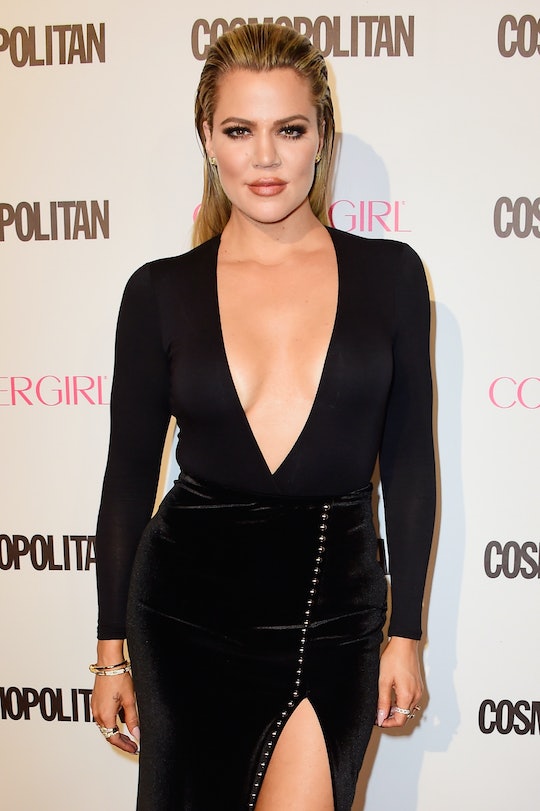 Khloé Kardashian's Baby Carrier For True Is Cute & Chic, But It Has A Steep Price Tag

As everyone who's ever turned on a laptop or smartphone knows, the Kardashian-Jenner clan has experienced a baby boom in the past year. And as a mom, it's always fun to compare baby equipment with fellow celeb parents. As such, a new series of photos and videos posted by one new Kardashian mama likely has you wondering just how much Khloé Kardashian's baby carrier for True costs? Well, it's more than you might expect, that's for sure.

In the photos that were shared to Snapchat and Instagram this week, and as explained by People, Kardashian and 4-month-old baby True are adorably rocking out to what sounds like Ariana Grande. Of course, when you're only 4 months old, you're not exactly able to Jazzercise yet, so "dancing" means hanging close to mom or dad in a snug little sling or carrier. And Kardashian's model, the Baby Carrier One Air by Babybjörn, looks simple and chic enough.

The grey mesh contraption, which features what resembles light pink piping for True's model, allows you to easily strap your little one in front of you, with adjustable straps that allow the baby to feel snug but have a safe, breathable surroundings. Meanwhile, your own shoulders are quite comfy ergonomically, even with a small load resting on you. The Babybjörn brand and my family go way back, so I personally have nostalgia looking at these pics; I probably can't count how many models I've gone through with three kids. But sheesh, the price!

As People reported, Kardashian's model retails at $230, as seen on buybuyBaby, but cheaper models are available through online retailers like Amazon. And at those prices, no wonder our last couple Bjorns were lightly-used hand-me-downs from friends, third baby and all...

In Kardashian's video, of course, the Bjorn is still new and immaculate, with the 34-year-old star appearing absolutely in love with little True. “Say hi, Mama,” Kardashian tells her little one, who's wearing an adorable bow headband.

Closely examining the Bjorn, it looks like the model color is "Anthracite," which can actually be found for almost $100 less on Walmart.com. Not that anyone's worried about Kardashian needing to shop around: The star appears on the new season of Keeping Up With the Kardashians and has her denim line, Good American, to manage, in addition to juggling True, her first child with Tristan Thompson, an NBA player. Kardashian gave birth in Cleveland, where Thompson is based, on April 12, with Kris Jenner in and the Kardashian sisters in attendance, according to TMZ.

Meanwhile, as Kardashian enjoys time with her bundle of joy, it's almost impossible to keep up with all the clan's news. For instance, there are fun stories of the other baby cousins — Kylie Jenner's daughter Stormi and Kim Kardahsian West's baby girl Chicago, all of whom sat for a joint photo shoot with True — and not as fun gossip, such as a report from People about a sisters' tiff, mainly with Kourtney. And of course, there was lots of feminist excitement out there after Forbes declared that Kylie Jenner may become the youngest self-made billionaire.

As for Khloé Kardashian, who recently endured some mom-shaming for piercing little True's ears, as outlined in The Independent, she seems to be a total natural in the parenting department — with the cutest baby gear, of course.