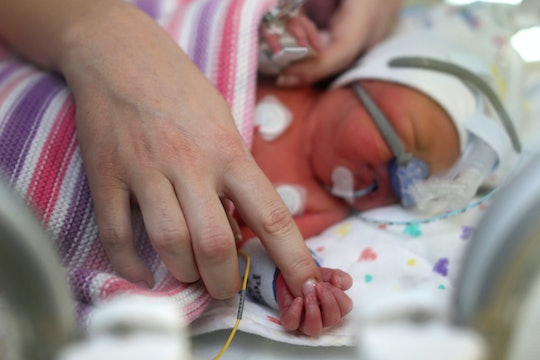 NICU Costs Could Skyrocket Under The AHCA

As exciting as it is, welcoming a new baby into the world can be a stressful experience for parents — especially if all does not go according to plan. And with the state of the American health care system in limbo as Republicans work to repeal and replace with Affordable Care Act, also known as Obamacare, complications or deviations from the norm soon become even more nerve wracking and costly. It could start very soon after birth, as how much a NICU stay would cost under the American Health Care Act — the GOP bill that recently squeaked through the House — would likely be dramatically more than what current ACA protections allow.

Of course, there's no one set figure for how much a stay in the neonatal intensive care unit costs, as it depends on factors like how long a baby is treated there and what kind of care they receive. Vox recently profiled a boy whose six-month stint in the NICU in 2010 was worth more than $2 million; In 2011, The Washington Post told the story of Colorado parents Nathan and Sonji Wilkes, who were initially charged $50,000 after their son required treatment for hemophilia and one day of observation in the NICU seven years before.

And, if it passes the Senate and eventually becomes law, the AHCA in its current form threatens to saddle families with much larger portions of such astronomical bills than they have been since Obamacare went into effect. That's because the current health care law bans "caps" on the expenses on health care allotted one enrollee. Before Obamacare, individual patients' benefits could expire once they reached around $1 million or $2 million. In fact, this was commonplace — and continuing treatments past that point could plunge patients into debt, ABC News reported.

But the MacArthur Amendment to the AHCA could bring this practice back for many plans nationwide. As a result, some babies who end up in the NICU for whatever reason could be in danger of not getting the care they need if their families cannot afford it.

Take the example of 4-year-old Charlie, who spent three months in the NICU after being born premature. Her mother explained the situation to ThinkProgress in a recent protest against AHCA, which she and others refer to as Trumpcare, after President Donald Trump:

Because of the ACA, there were no lifetime caps which she would have exceeded before she came home from the NICU. She's also able to be insured because there’s no [pre-existing] restrictions. The ACA is really a lifesaver for her. If she loses it and we’re on Trumpcare we’re out of luck.

Charlie has the chance to catch up and lead a normal life. It's through PT, OT speech, her specialist, and without insurance we won't have access to those anymore, which really cuts out her chance at anything.

According to the World Health Organization, 517,400 babies are born prematurely in the United States each year. And a preterm birth is a common reason why a newborn may require NICU care in the first place.

But there are many other conditions that land babies there — and some (like a heart problem, for example), could be consider "pre-existing" under the AHCA. The AHCA would also permit states to waive the Obamacare provision that bans insurers from charging people with pre-existing conditions higher premiums. In turn, aside from potentially racking up huge medical bills in the NICU, these babies could encounter hugely inflated health insurance costs for their entire lives under the AHCA. This could even price them out of the market entirely.

It's hard to put a price tag on exactly what the expenses for families could climb to if the AHCA passes as it's currently written. But it's not hard to see that the implications could be catastrophic.