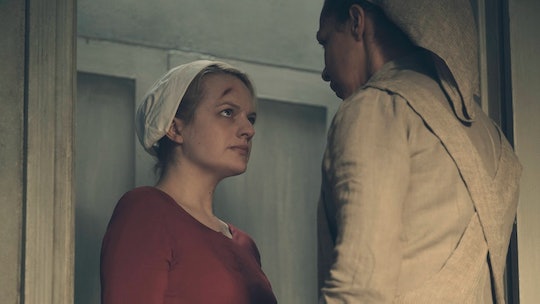 Ever since streaming platforms like Netflix and Hulu started churning out original content, we’ve all gotten spoiled by the ability to watch some shows in their entirety in one sitting. For new seasons of Hulu shows though, like The Handmaid’s Tale, it’s not as simple as putting out an entire season at once, like Netflix tends to do. So, how often does The Handmaid’s Tale air? You definitely won’t be able to have a marathon of all of the new episodes at once unless, of course, you wait until the end of the season. Instead The Handmaid’s Tale will premiere its first two episodes on April 25 and then air the rest of the 13-episode season each week on Wednesdays.

Of course, you can do the unthinkable and wait until the season is over to watch all of the episodes at once, but personally, I don’t have the self-control for that. When Season 1 of The Handmaid’s Tale came out, the format was similar, except the first three episodes were released for the premiere, rather than just two, followed by the remaining episodes debuting once a week. It’s not really surprising that Season 2 of The Handmaid’s Tale will follow a similiar pattern, but at the very least you can still opt to watch it any time throughout the day.

The show, which has already won both Emmy Awards and Golden Globes, is based on Margaret Atwood’s 1985 novel of the same name and although the book was never given a sequel and ended much in the same way that Season 1 concluded, apparently there are still big plans for the series. "You should still expect so much that comes from Margaret's world," showrunner Bruce Miller said at the Hollywood premiere of The Handmaid’s Tale, according to The Hollywood Reporter. "This is very much a continuation of that story. In some ways, when you read the book, all you want is for the story to continue. It's the biggest cliffhanger in the world at the end of that book. I feel like I've been thinking about Season 2 ever since I read the book!"

He also teased that for Season 2, viewers will get to see June, aka Offred (Elisabeth Moss) as she embarks on the journey that led her away from the Waterford house at the end of the first season. Of course, it could either be something better for her or an even worse fate, but just like June put her trust in the hands of Nick, viewers pretty much have to do the same.

In the trailers for The Handmaid’s Tale Season 2, things look worse than ever in Gilead. (Fans will even get a glimpse at the terrible experiences women face in the Colonies.) But there also seems to be even more to look forward to with the new season, including Moira potentially trying to raise more awareness for the women still stuck in Gilead, as she’s now another refugee in Canada.

Somehow, all of this has to fit in the 13 episodes that were ordered for Season 2, but since that was raised from the 10 episodes of the first season, somehow I think it will make a huge difference. The only downside is that after the first two episodes air on April 25, viewers will then have to wait until next Wednesday to see more. It’s not exactly ideal, especially for those of us who are accustomed to watching entire seasons of shows at once, but the slightly extended season almost makes up for that fact.