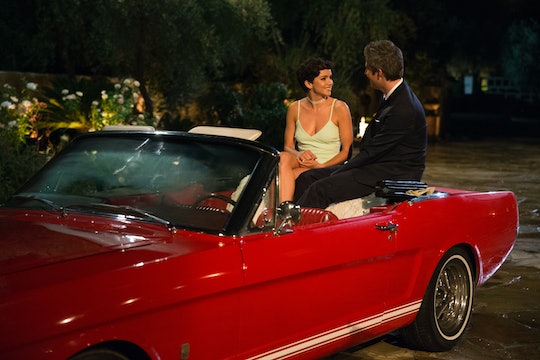 Bekah Is Keeping A Secret From Arie On 'The Bachelor'

By now, most Bachelor fans are in full investigation mode as far as the contestants are concerned, if only to round out everyone’s Bachelor fantasy roster for the season ahead. And there are no doubt tons of fans asking about Bekah Martinez, who’s the only contestant without an age listed on her Bachelor bio. So, how old is Bekah on The Bachelor? Her age is the big mystery surrounding her this season and one that will unfortunately bring the drama in from some of the other women as well.

Obviously if she wants to hide her age from Arie Luyendyk Jr., it’s because she’s either considerably older or younger than the average Bachelor contestant. And it might just be those big innocent-looking eyes, but I would imagine that she’s much younger than the other women this season. Though her Bachelor bio doesn’t list her age, the promo for the season focuses partly on her worries over revealing how old she is to Arie, and my best guess is that she’s 22 years old.

Back in February 2016, she posted a photo of herself with 21 as the hashtag and although it could have meant anything, it definitely makes sense that now, a year later, Bekah would be 22. If she was 23 or 24, I doubt she'd be so sensitive about the topic since there have been many contestants in the past who fall into that age bracket. So she's probably closer to 22, which is what most media outlets have reported as well.

Since Arie is 36, that would make them 14 years apart in age, so part of her worries might be that Arie wouldn't take their budding relationship as seriously if he became aware of their significant age gap. In reality, Bekah’s age shouldn't be the deciding factor in whether or not Arie wants to pursue their relationship further (you can be young and still want to settle down), but the fact that she's keeping it from him could make a difference.

If you look at Bekah's Instagram before The Bachelor, you can tell right away that she possesses many attributes that could hold Arie's interest, regardless of age. She's big on rock climbing and generally enjoying the outdoors, so at the very least, she would bring legit adventure and excitement to Arie’s life. She just needs to trust in their connection and worry less about the difference in their ages.

In the past, there have been some age gaps between Bachelors and their chosen suitorettes, so this wouldn’t even be the first time in Bachelor Nation, even if this could be the largest gap yet. Season 13’s Jason Mesnick and Molly Malaney, who have an eight year age gap between them, are still together today and even welcomed their first child in 2013. So for some, age really is just a number and won't be something that stands in the way of true love.

Outside of The Bachelor, Bekah works as a nanny, so she definitely has a maternal side and an interest in children. Based on what I know about her so far, she seems more than ready for a commitment. On her Bachelor bio, she said that in five years, she hopes to be married and ready to start a family, so she definitely appears to be in the right mindset for what Arie is looking for in a wife and lifelong partner. If that's the case, then her age should really be a non-issue.