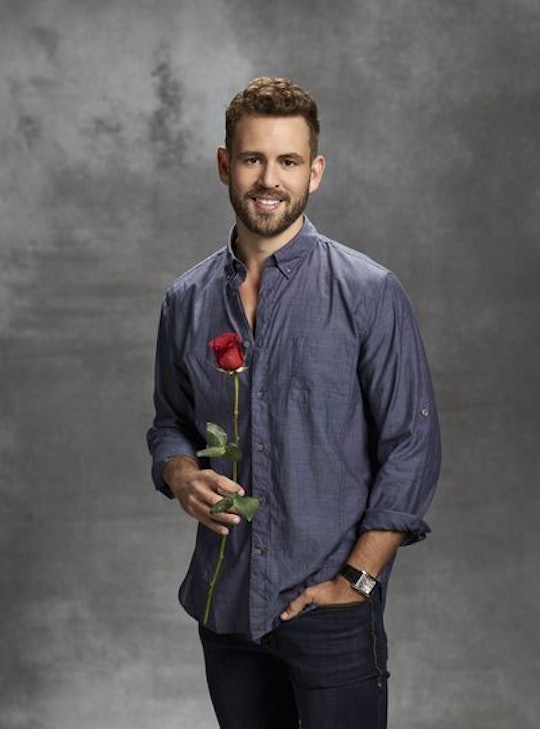 'The Bachelor's Nick Viall Is Older Than You Think

Unlike Singled Out, MTV's dating show of the '90s, The Bachelor doesn't have a clear cut age cut-off for the starring man. This is good for the new Bachelor, Nick Viall, since he otherwise may have not been considered to be the next rose distributor. But how old is The Bachelor star Nick Viall? He has been on The Bachelorette twice before, as well as a season of Bachelor in Paradise, so this isn't his first rodeo in the TV dating realm. And at 36 years old, Nick is significantly older than most of the women vying for his love and affection during Season 21 of The Bachelor.

In fact, the youngest contestants this season are Hailey, Ida Marie, and Alexis, who are all just 23 years old. When Nick began looking for love within Bachelor Nation, he was 33, which still isn't super young, but it's not unreasonable to think that now, Nick is starting to hear some invisible clock loudly ticking away, forcing him to finally find someone.

When Nick began his foray into finding love on reality TV, he was a contestant on Season 10 of The Bachelorette. He even made it to the final two in the finale, but was turned down by Andi Dorfman for Josh Murray, who would later become his rival yet again on Bachelor in Paradise. The following season of The Bachelorette, Nick showed up during Week 4 to compete and once again, made it to the final rose ceremony, only to be turned down yet again. But now, it's Nick's turn.

Nick might be significantly older than most of the contestants on Season 21 of The Bachelor, but he also deserves to find love more than probably any of the other possible contenders for his position, so age really isn't an issue here. Chris Soules, the Bachelor of Season 19, was 33 when he appeared on the show to find love from one of a couple dozen women. And Juan Pablo Galavis of Season 18 was 32 when he was the Bachelor, so being an adult man ready to settle down is what makes for the most reliable Bachelor of all.

If you look at Ben Higgins (28), who was the Bachelor of Season 20, the relationship between him and fiancée Lauren Bushnell isn't exactly perfect. In fact, on their own reality show, Ben & Lauren: Happily Ever After?, the two have found it kind of hard to find their footing to move forward with a wedding and their future. So maybe age will be the key to success, at least in Nick's case.

Maybe Nick being older is a good thing, making him more than ready to settle down. He deserves to find love this time around and let's hope that now that the ball (or rose) is in his corner, it'll be able to happen.