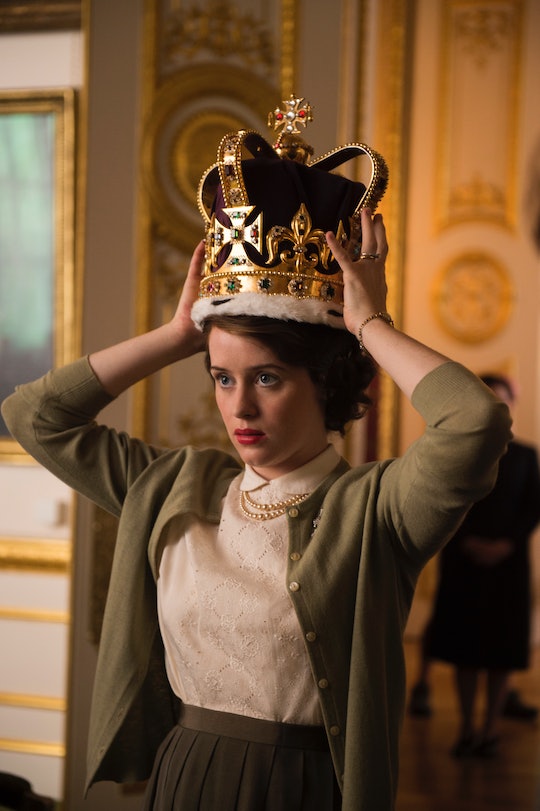 How Old Was Elizabeth When She Was Crowned Queen? Her Rule Began At A Young Age

Living outside of royalty, most people assume that those in the royal family automatically know how to run a country and uphold diplomatic duties no matter what. But for Queen Elizabeth II, the possibility of ascending to the throne had never really been expected. So if you find yourself asking, how old was Elizabeth when she was crowned Queen, you're not alone. The new Netflix series, The Crown, explores her early years as the Queen of England and what it meant for her to accept the crown so unexpectedly and at such a young age, while also covering her new marriage to Prince Philip.

In truth, Queen Elizabeth II was never in line to take the throne in the first place, much like her father before her since, believe it or not, King George VI wasn't originally supposed to hold the crown either. He was the second son of the king before him, George V, and therefore it was expected that his older brother Edward VIII would rule over the throne once their father died. But instead of that happening, Edward VIII gave up the throne almost immediately in order to marry a divorced American woman with whom he had fallen in love, hence creating the domino effect for Queen Elizabeth II's eventual rule. In fact, if Edward had not abdicated the throne, it's very unlikely that she would have ever been in the position to take the crown herself.

When King George VI died in 1952 after succumbing to lung cancer, 25-year-old Princess Elizabeth was on her way to a diplomatic visit to Australia, but had stopped in Kenya first for a bit of relaxation. But as soon as she received the news of her father's death, she prepared to fly back to London immediately. Almost directly following the news of her father's death, Princess Elizabeth was declared Queen Elizabeth II, though her official coronation wasn't until the following year.

At 25 years old, Queen Elizabeth II joined a long line of royalty forced to rule at a young age, but she was by no means the youngest. The youngest queen to start her reign was Mary, Queen of Scots, who did so back in 1542 at six days old. (That is a lot of responsibility for one baby, in my opinion.)

Still, being 25 with no prior expectations to take the throne, Queen Elizabeth II courageously rose to the challenge, changing her life and that of husband Prince Philip's forever.

The Crown details not only Queen Elizabeth II's early years of her reign, but also her marriage and the way being a young queen would shape her country, as many came to question her qualifications to rule them. All episodes of the first season of The Crown are availble Friday, Nov. 4, on Netflix.