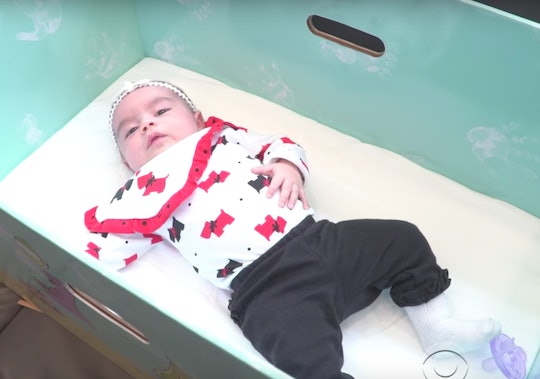 How Safe Are Baby Boxes, Really?

There's a trend sweeping the United States, and its goal is among the most worthy and admirable: to promote safe sleep habits for infants and prevent sleep-related deaths, like sudden infant death syndrome (SIDS). So far, New Jersey, Alabama, Ohio, and Texas have established programs to equip all new parents with a baby box — a simple cardboard box with a firm mattress and a snugly fitted sheet in which babies can snooze. But while advocates believe that the boxes themselves are safe sleep surfaces, they consider the boxes a hook to encourage parents to get educated about safe sleep habits for their newborn. Other experts worry that the boxes themselves are unregulated. So, how safe are baby boxes, really?

In the states that are giving away the boxes, parents don't simply receive one with no strings attached. Instead, they're required to watch an online video about safe sleep for infants and pass a quiz on the subject. In exchange for doing so, they receive a box that doubles as a bassinet and is filled with other baby essentials, such as breastfeeding accessories, a onesie, diapers, and wipes. It sounds great, and there is a lot that's great about it. But, according to the American Academy of Pediatrics, "there is insufficient data on the role cardboard boxes play in reducing infant mortality." In other words, we don't know for sure whether the boxes themselves are going to help save lives — or whether they could potentially have some other effect.

Dr. Thomas Heygi, medical director of the SIDS Center of New Jersey, for example, is skeptical. He told NPR he worries because it has not yet been proven that the boxes meet safety standards that other infant sleep surfaces do. Going all-in for an unregulated product may not be the best idea, he told NPR, adding that crib bumpers initially seemed like a smart idea — and that turned out not to be the case.

"We're very concerned as pediatricians in adopting interventions for babies without thoroughly testing them, because historically we've been burned," Heygi said.

But The Baby Box Co., the Los Angeles-based company that distributes many of the boxes, said in a previous statement to Romper that because the Consumer Product Safety Commission (CPSC) doesn't actually have safety standards for baby boxes, it "voluntarily" underwent the required testing for bassinets. While the boxes aren't technically considered bassinets in the United States, they are in Canada, the United Kingdom, and Europe.

Besides, the company elaborated, the boxes themselves aren't the main draw — the education component is. "It is not our physical product that has an impact on SIDS and/or SUID, but rather the integrated education model via which we distribute," the company wrote in its statement to Romper. "We have been consistently open about this reality and continue to be transparent in this regard."

More information about this is needed, New Jersey Child Fatality and Near Fatality Review Board chair Dr. Kathie McCans told NPR. The organization is partnering with the Baby Box Co. for the program in New Jersey — and she believes that moving forward with the program will be beneficial even as experts continue to work out the kinks.

As for the box itself, simply owning it is certainly not a cure-all. Pediatrician Harvey Karp told Vogue that the simple presence of the boxes won't guarantee that exhausted new moms and dads won't opt to bring their babies into beds with them, a practice some consider dangerous, and the same is true for those who have bassinets or Pack ’n Plays. He told the magazine:

Karp called for more support for new parents to remedy this. But they could also use reinforcement via additional education, and those who have completed the quiz to get their baby boxes will definitely have had that.