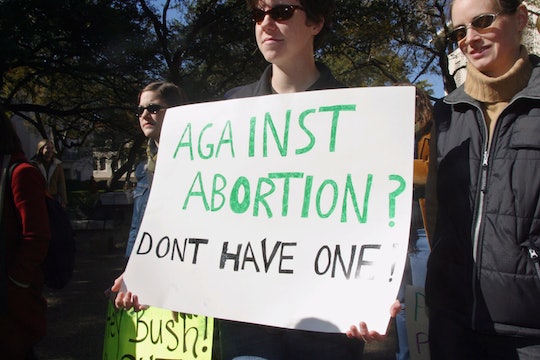 How SB 8 Will Affect Women Who Miscarry In Texas

On Tuesday, Texas Gov. Greg Abbot signed into law a bill known as S.B. 8, or, more formally in the Texas legislature as "An Act relating to certain prohibited abortions and the treatment and disposition of a human fetus, human fetal tissue, and other tissue resulting from pregnancy" — so, basically, a real-life prequel to The Handmaid's Tale. Not only does S.B. 8 criminalize one of the most common second trimester abortion methods — and actually the safest — it would require women obtain "dignified disposition of embryonic and fetal tissue remains." In layman's terms, Texas just required fetal funerals. But what if losing a pregnancy is beyond a woman's control? How will S.B. 8 affect women who miscarry in Texas?

As if going through a miscarriage wasn't painful enough, Texas legislators have enacted a downright cruel requirement for miscarrying mothers. If a woman has a miscarriage in a medical facility, they are required to have their fetal remains buried or cremated, according to S.B. 8. But hey — if you can't afford it, the law also says that the Texas State Department of Health Services will set up a fetal "Burial or Cremation Assistance" registry of "participating funeral homes and cemeteries willing to provide free common burial or low-cost private burial."

So, whether you're 6 weeks or 22 weeks pregnant, if you start to miscarry and head to your OB-GYN because of terrifying cramps and bleeding, you might be better off staying home — at least emotionally. Obvious medical disclaimer: If you're experiencing a life-threatening emergency, get thee to a hospital. But in all seriousness: If you "complete" your miscarriage in a doctor's office, the provision about fetal burials applies to you, thanks to S.B. 8. And if you're over 20 weeks gestation, or the fetal remains weigh more than 380 grams (approximately just over three-quarters of a pound), Texas requires a fetal death certificate.

Heather Busby, the executive director of NARAL Pro-Choice Texas called S.B. 8 in a statement "a dangerous intrusion into the doctor-patient relationship" and "does nothing to benefit health and safety." In a moving piece for Rewire, writer Stephie Grob Plante called S.B. 8 out for what it really is: a cruel piece of legislation meant to shame and manipulate women for their reproductive choices — or, in Plante's case, a miscarriage beyond her control:

Pregnancy loss can feel confusing when you’re an advocate of reproductive rights. I followed the news on the fetal remains bill, and felt appalled that women might soon be subjected to that requirement, yet wondered if a funeral would give me any closure... And then I realized: I was the perfect target of the anti-choice movement. I’d almost fallen for its logic too. In beginning to imagine myself as a parent, I’d compromised my understanding that I wasn’t one yet.

Even though S.B. 8 has been made law, it's likely to face strong challenges in court, when SCOTUS struck down a Texas anti-abortion law that placed an "undue burden" on women to access abortion in their state. From criminalizing safe abortion procedures and threats of felony jail time for abortion providers who seek to skirt the law, to fetal tissue burials and fetal tissue donation bans, it's clear that S.B. 8 places a shameful undue burden on any Texas woman who wants to have reproductive autonomy.