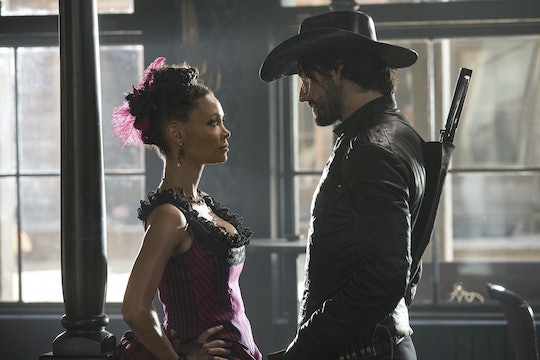 How Similar Is 'Westworld' To The Movie? The HBO Series Has Some Upgrades

HBO's new instant hit, Westworld, is a sci-fi fantasy show about an amusement park set far into the future, where androids roam freely in an Old West atmosphere to interact with however you want, and the scientists and creators monitor the whole thing from their control room. It's a unique concept for a TV show, but one that isn't totally original, as it's based off a movie of the same name. But how how similar is Westworld to the movie? The movie Westworld was created by Michael Crichton, the same author who penned the Jurassic Park novels, and was released in 1973.

Although it's taken more than 40 years to make the film into a TV show, HBO has done it with Westworld and there are plenty of similarities between the two. But, as to be expected, there are also plenty of different aspects brought into the TV show. Obviously, the technological advances we have today in terms of special effects and makeup are drastically different, as is the production value of a TV show today compared to a big screen movie of the 70's, but as far as the general plot of Westworld goes, the TV show and the movie seem to be along the same lines. At least, for now.

The Movie Is Also About The Androids Malfunctioning

The main story of the movie Westworld is the androids malfunctioning within not only Westworld, but also Medieval World and Roman World too. The "infection" among the robots hits Westworld when a robotic snake bites John Blane (James Brolin), a regular visitor of the park. Since none of the androids are supposed to be able to harm humans, this is a huge problem.

Much like the issues we see in the first episode of Westworld on HBO, when the androids are questioning things they shouldn't be or repeating themselves like they're stuck on a loop, there is an obvious bug within the system.

The Old West Part Has A Similar Layout

In both the movie and the TV show of Westworld, there is the typical Old West layout with the saloon and brothel workers, a barroom casino, and the usual storefronts porches typical to that of the Old West times. Both the TV show and the movie share the values that the creators of the park wish to instill in their visitors, urging them to take part in any sort of delights they want, whether they be of the gun slinging or sexual kind.

In the movie, some of the technicians worry about a bug running through the systems of the different androids, but another technician brushes off the possibility of something like that actually spreading between the machines they've programmed. In the show, we see a lot of the behind-the-scenes, so to speak, as Dr. Ford (Anthony Hopkins) and Bernard (Jeffrey Wright) talk to the androids and program them, worrying about any malfunctions between each of them.

Both Show Advanced Forms Of Technology For Their Time

Obviously in 1973, there was nothing even close to the sort of robotic technology they show in the movie. Likewise, the TV series gives us a glimpse into the super ambitious technological advances we could only hope to achieve someday. The show opens with what looks like a huge, advanced 3D printer working on creating these artificial human beings and animals, and even for our time, much of the technology in the show is way beyond us.

Of course there are plenty of differences between Westworld the TV show and the movie, which you have to expect, if the TV show is going to last at least a reported five seasons long. The first season can follow the movie closely enough, but there should probably be setup for the future of the series as well.

The TV Show Focuses On Dolores A Lot

In the movie, we follow Brolin's character John and his friend, newcomer Peter Martin (Richard Benjamin), as they explore Westworld and eventually find themselves being hunted by a popular dueling character of the narrative who is also an android gone bad.

Now, in the TV show, we have seen a couple of characters in the brothel who are each experienced and new, but for the most part, we seem to be following things from the point of view of the androids themselves, namely Dolores, rather than from the view of guests at the park.

The Movie Has Two Human Protagonists

In the movie, John and Peter wake up from a night of drinking to discover dead humans and malfunctioning androids all over the park. They encounter the gunslinger character, who challenges them to a duel and, assuming that it's still part of the experience, John agrees, only to be fatally shot by the host, who is then out on the hunt for his friend, who immediately flees the area.

In the TV show, we haven't yet met any humans we're particularly invested in, except for maybe a technician or two, but for the most part, we aren't yet following the story of any important visitors of Westworld.

In the movie Westworld, you get the impression that the amusement park is there mostly for the benefit of adult humans who wish to engage in violence or sexual fantasies that might be deemed otherwise inappropriate out in the real world, and in the TV show you see that too.

But you also see a family at one point, which doesn't make a whole lot of sense, since there isn't much that a kid can indulge in that they wouldn't be able to get into at, say, Disneyland or a similar amusement park.

While neither of the worlds were featured too prominently in the movie, Roman World and Medieval World are shown a couple of times. Since the malfunction in the androids begins in those worlds, you get to see a glimpse of their errors, and then at the end of the movie, you see Peter escape Westworld to Medieval World, but so far in the TV series, we haven't even heard mention of any other amusement parks. Granted, there is still plenty of time for that, but right now, all we're supposed to know about is Westworld.

Westworld as a TV show based off the movie is pretty ambitious, as far as filling the next five seasons with enough content and story lines to keep things interesting and moving along at a pace similar to that of the very first episode, which brought in 3.3 million viewers. And focusing attention on the androids' point of view makes for a much more engaging set of story lines rather than just watching the human newcomers come and go.

With so many questions already and a full cast of both androids and humans, it doesn't look like the new HBO series is going to have a hard time filling in at least five full seasons.