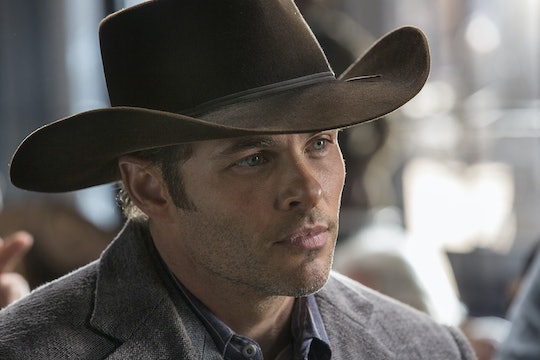 Is 'Westworld' Based Off Of The Movie? The New HBO Series Seems Like It Has A Lot Going On

A scientist, a cowboy, and an android walk into a saloon, but which one is which? In the upcoming HBO series Westworld, the joke would make perfect sense, since the premise is that, in the distant future, a group of scientists have created an adult theme park filled with artificially created people who believe they're living the real deal, while wealthy patrons visit the amusement park and interact with them. So, is Westworld based off the movie by the same name? Actually, yes it is based off a movie by Michael Crichton, the creator of the Jurassic Park novels, which came before the movies. But with the plot of the 1973 movie and the HBO series of the same name, it's totally understandable if you assumed that Westworld was based off a book. A novel of the same name was released a year after the movie came out, but the story stems directly from the film.

The whole idea behind Westworld that came to Crichton was that there would be a series of parks, all focusing on different parts of history, including Roman and Medieval times, but in the film and short-lived TV series of Westworld, the main focus was of the Western-themed park and the unaware androids who'd been created for the sole purpose of pleasure or torment at the hands of the amusement park patrons. Are you still confused?

If Westworld looks like it has a lot going on in its upcoming first season, that's probably because it does, but that only means that with Executive Producer J.J. Abrams (Lost) at its helm, there will be that many more "WTF" moments to keep you on your toes. Because yes, there will be plenty to keep up with.

This Takes Place Sometime In The Future

That's probably fairly obvious, but even as a movie with awesomely bad 1970's effects and props, the story was meant to take place in the future, however distant it may be. The technology featured in Westworld is obviously far more advanced than anything we currently have our hands on, but that should be a comfort since the whole idea behind an amusement park full of robots who don't know what they are is kind of insane.

In the trailer for Westworld, we see Dr. Robert Ford (Anthony Hopkins) tell Dolores (Evan Rachel Wood) to "bring yourself back online" and then we see a shot of her sitting in a darkened science laboratory with him. So does this mean that every inhabitant of the amusement park Westworld is a robot with the ability to accidentally "power down"?

Who Are Also Somehow Human

On the other hand, though, there is a scene in the facility outside of Westworld where there is an actual human body with muscles and tissues being created in the lab. So maybe the creatures in Westworld are artificially created humans, but with technology to be controlled as the creators see fit.

Paying Customers Can Come And Go

In the movie Westworld, the patrons of the amusement park would pay $1,000 to spend the day in the park, enjoying the brothels or shooting the cowboys in duels, and then they could come back and do it all again, provided that they pay the admission fee. In the trailer, it appears that Teddy (James Marsden) might be one of those patrons who falls for Dolores and is the person Dr. Ford is talking to when he says that the people of Westworld aren't real.

One Of The Main Characters Becomes Self-Aware

Dolores seems to be part of the downfall of the Westworld amusement park. She starts to realize how strange things are in her world and wonders what life is like outside of where she's lived for as long as she's programmed to remember.

Something Goes Wrong With The Technology

Bernard (Jeffrey Wright, Boardwalk Empire), presumably a scientist, confides in Dolores that something is wrong with the world they created. This is made abundantly clear by the fact that we're then shown almost everyone in Westworld laying out on the dessert ground, seemingly dead. Or, at the very least, somehow powered down.

Even though Westworld the movie was written by an author, the movie and the new HBO TV series are not based on books of any kind. But that just means that beyond the material of the film, Westworld is going to have so much room to have anything play out that the viewers won't even be aware of before it happens. Could Westworld be the next Game of Thrones for HBO? Let's be honest - those are some extremely large shoes to fill, but the show will be ending in two (literally) short seasons, leaving plenty of room for Westworld to take its place as the fantasy show of the network.