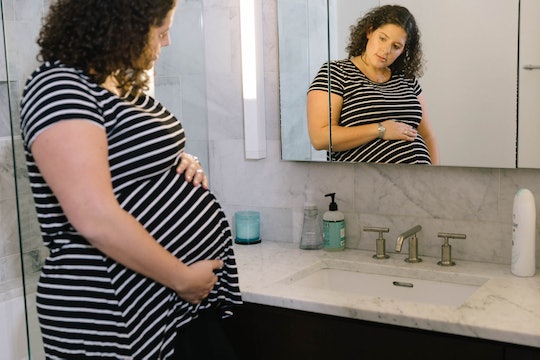 I remember losing my first mucus plug more vividly than I remember losing my first tooth or even my virginity. That's because it happened at an extremely inconvenient time — at work. I was in the studio, recording a voiceover for a commercial, when I felt something slick in my downtown. That less-than-pleasant sensation turned out to be a blob of blood-streaked petroleum jelly looking pile of grossness, and it completely trashed the cutest pair of Natori panties. Because, I'm sorry, I could've taken them off and rinsed them or any other possible solution, but I just wasn't having it. I was almost 38 weeks pregnant, super hormonal, really angry at my cervix, and I just yanked those puppies off and threw them away. (OK, I definitely rolled them up in a ton of toilet paper so no one would see what was in the garbage.) By this point, my OB-GYN had warned me what was going to happen, so I was mostly irritated at myself for not being more prepared. I was married to an Eagle Scout for heaven's sakes.

But I was stoked because I thought that I was, you know, minutes away from baby time. As it turns out, I still had a few days to wait yet. Was my experience normal, or am I an anomaly? I called Anna Rhodes, Nurse Practitioner, and asked her, "How long after you lose your mucus plug do you go into labor?"

She tells Romper that while your mucus plug is "an indicator that you're getting ready to deliver," it's not an egg timer, "and not all women notice when they lose it."

According to Rhodes, your mucus plug is "basically the stopper that lives up in your cervix that prevents bacteria from traveling up into your uterus while you're pregnant and causing illness and infection to occur." She says that it falls out "as the cervix begins to soften, which signals that labor is approaching. But, it can't give you an estimate. It may be hours before you deliver after losing your mucus plug, or it might be weeks." She says that it's not a complete barrier, though, because some bacteria can make its way into the uterus from the vagina.

Rhodes also notes that while blood in your mucus plug is normal, it shouldn't be more than a tablespoon or two of blood. If there is, or if it is suddenly bright red and continually leaking, call your OB-GYN immediately, as it might signal a problem like placenta previa. Also, you should let your OB-GYN know if you lose it before 37 weeks. While it's not necessarily a sign of danger if it's lost before that milestone, it's an important piece of information that will better allow your OB-GYN to treat you or take any necessary measures to make sure that you and your baby are as healthy as possible.

Pregnancy sometimes feels like the world's longest waiting game, and sometimes it feels like it passes in the blink of an eye. Towards the end of my pregnancy, I was wishing I had one of those turkey timers to tell me when my babies were baked to the proper temperature, but alas, there is no such appliance. Turns out, the mucus plug isn't a very good clock, either. Lame.