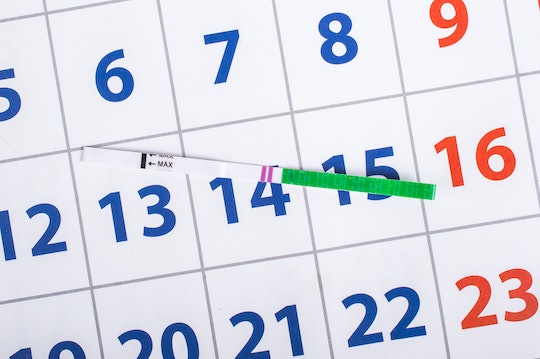 How Soon After Your Period Should You Take An Ovulation Test? Probably Later Than You Thought

What’s one of the most important parts of trying to conceive (TTC)? Ovulation, of course, since that’s when your egg drops and is ready for those little swimmers. Fertile windows, cycles, and ovulation days can be confusing though, and Ovulation Predictor Kits are helpful tools to help you figure out when you need to hit the sack to conceive. But how soon after your period should you take an ovulation test? Does the time of day matter, and at what part of your cycle should you begin testing?

Your cycle begins on the very first day of your period and is measured from that day forward. If you conceive, this is how your doctor will determine how many weeks/months along you are. Seems easy enough, right?

But because I have Polycystic Ovarian Syndrome (PCOS) and the awesome ability to not always ovulate at the same time during my cycle (or at all), it’s been recommended to me that I start testing for ovulation the day after my period stops, because I could be ovulating early, and I don’t want to risk missing the window.

However, every woman is different when it comes to cycle lengths. The American Pregnancy Association (APA) suggested waiting to test until you notice a build-up of “fertile-quality cervical mucus," since tests can get expensive. What is fertile-quality mucus? When it looks and stretches on your fingers like egg whites.

“If a woman has an average cycle length of 30 days, subtract 14 days, which means ovulation day is typically day 16,” Ruiz says. “But remember, there is variation from cycle to cycle, so my patient with the 30 day cycle should start testing for ovulation day 10 or 11.”

But which tests are best? Ruiz says, “Most kits contain nine testing sticks, and all kits are pretty reliable — but digital kits are easier to read.” His instructions on when to test are in direct alignment with my own ovulation predictor test instructions, which read, “On your first day of bleeding or spotting, count 11 days and then begin testing for your LH surge.”

So what's an LH surge? The APA noted that LH is the “Luteinizing hormone,” which is always present in your urine, but “it increases 24 to 48 hours prior to ovulation, [triggering] ovulation.”

The APA also suggested that the time of day doesn’t matter when taking an ovulation test, but to test the same time each day for greater success in accurate readings, and to “reduce your liquid intake for four hours beforehand.”

Between all the lingo — LH surge, luteal phase, fertile window — it may seem overwhelming to know what the heck you’re doing when TTC, and when to take an ovulation test. If you have a pretty normal cycle, it’s usually safe to begin to test 11 days after your period starts. If you’re like me and have irregular cycles and/or PCOS, it may be a good idea to start testing the day after your period stops to be sure. Since this can get expensive, I suggest these tests from Amazon, or something similar. Otherwise, try to stay in tune with your body, and check out your cervical fluid every day after your period stops — the fluid is a good indicator of fertility and will let you know when you should test.