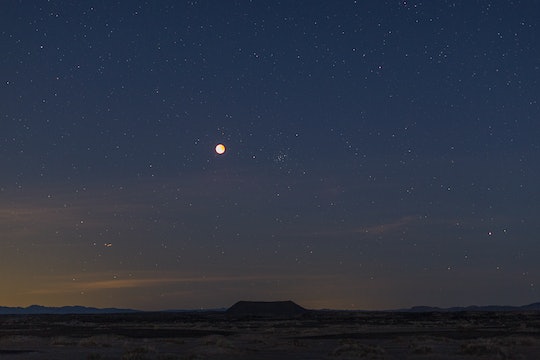 Here's How Your Toddler Will Act When The Micromoon Rises

If you are at all superstitious, you may already be weary of the impending calendar date just days away: Friday, Sept. 13. When you combine that traditionally frightening date with the fact that there will be a full moon that very night, it creates a recipe for anxiety-provoking feelings. Mind you, the full moon won't be just any old full moon, but a rare micromoon that could turn those anxious emotions into all-out havoc — especially for your kiddos. Here's how the micromoon will affect your toddler, according to experts, as well as what they say you can do about it.

Although the moon that will light up the night sky this Friday night is known by many names, perhaps the most recognizable is the Harvest Moon, which is the full moon that happens closest to the autumnal equinox, according to NASA. NASA also reported that while the pinnacle of this year's Harvest moon will occur shortly after midnight on Sept. 14, the moon will appear full from Earth from Thursday night to Sunday morning. Due to the distance of the moon from the earth, as it orbits will also appear particularly tiny, hence, its categorization as a micromoon.

So, it's a full moon, Harvest Moon, and a micromoon, but what does that mean for the lunar effects that could impact human emotions? "The micromoon will just mean that the earth and the moon are far away in distance than they have been in a while," New York-based astronomer Lisa Stardust tells Romper via email. "All full moons shed light on matters. This luminary will be revealing enough — but maybe not as emotional as we thought because of the distance between the earth and the moon."

This is great news for those fearing that the micromoon will bring with it a weekend wrought with disaster. It might not be a walk in the park, but Stardust says that the micromoon provides an opportunity to take stock of the decisions we make — something parents do all day every day, but something your toddler may not be so skilled at yet. "For a whole set of different reasons, we may be unsure of our decisions. The micromoon will allow us to take a step back and gain clarity on matters. For your toddler, that means having a 'time out' or two," she says.

Maureen Healy, child psychologist, author of The Emotionally Healthy Child and parenting coach at Growinghappykids.com tells Romper that she has seen the full moon's effects play out in her own practice. "It's very well documented that emergency rooms spike on the full moon, which means they have a higher-than-average rate of patients. In my private practice, I get more frantic messages from clients about their child and if I can see them immediately near the full moon," she says. "Parents mention that their young children often show increased aggression and emotion during the full moon. This may include increased temper tantrums, arguments, and tears without explainable cause."

The last time a micromoon shined down upon the earth was in the year 2000, and the next micromoon is not expected to occur until 2049. Luckily, your toddlers will be nice and grown up by then, so this is the only time you'll have to worry about dealing with potential mishaps with young kids during a micromoon. As fantastic as that is, knowing that you might still be dealing with some tantrums and frustrations this coming weekend is probably stress-inducing (to say the least) but there are some ways you can help calm your child should the micromoon affect their behavior.

"Emotions are energy in motion (as derived from the Latin root emovere). Full moons pack a lot of energy and stir a lot of emotions, which children are sensitive to," Healy says. "The same tools that parents use prior to the full moon during emotional moments can help during this full moon. For example, you can hug your child and pat their back saying, 'Everything is going to be OK. I love you,' or teach them a breathing technique or direct them to release their emotions constructively like hitting a punching bag."

In addition to using tradition methods to calm your child, Stardust recommends connecting to the energy of the full moon to help your toddler (and yourself) during this time. "I would suggest making sure your toddlers and yourself take baths to embrace the lunar energy (as the moon controls water and the tides of the ocean), stay hydrated, and get some rest," she says. "If your toddler has temper tantrums, it’s normal! Full moons (regardless of their size) bring out our emotions."

Stardust's best advice for the weekend ahead with your toddler? "Go with the flow."