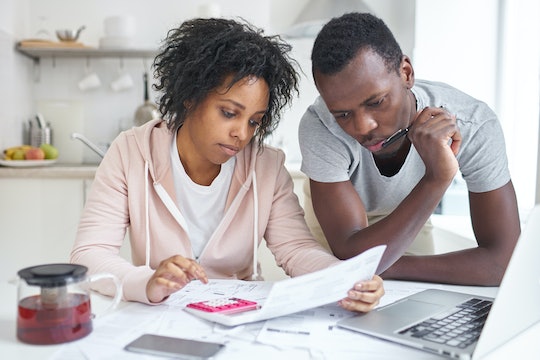 How To Apply For A Tax Extension, Because You Know You're Not Ready To File Yet

If the sudden realization that Tax Day is just around the corner has sent your less-than-prepared self into a state of panic, you should know that you're far from alone. In fact, the IRS fully expects that a significant portion of the population will slack off just long enough to miss the deadline (which happens to be April 17, 2018). That's why they allow people to file for an extension, which gives you six more months to do your taxes (phew!). So how do you apply for a 2018 tax extension?

The good news is, according to Forbes, applying for an extension doesn't make you more likely to get audited (a popular misconception). And again, it's not at all uncommon: As Forbes also stated, nearly 10 million taxpayers are expected to file for an extension this year. And while you don't have to explain to the IRS why you need extra time, if you're delaying doing your taxes because you know you're going to owe money and you don't have it, the worst thing you can do is let this fear stop you from addressing the issue altogether.

Why is that a big mistake? As the CNBC article went on to explain, those who owe money are subject to a significant penalty if they don't file at all: 5 percent of the unpaid balance for every month that it's late (up to a maximum of 25 percent of the total amount owed). Meanwhile, if you file your return even though you can't pay the full amount you owe, the penalty is much lower (usually about 0.5 percent per month of your unpaid taxes). Plus, it's important to note that filing for an extension only gives you more time to file, not more time to fork over whatever money is due. A six-month extension generally does nothing to delay the failure-to-pay penalties from accruing; only the failure-to-file charges are affected.

So when you file for an extension, if you know you're going to owe money, pay as much as you can. The IRS will bill you for the rest, and you can look into setting up a payment plan. There is usually a fee to do so, but it's not exorbitant (generally between zero and $149, according to CNBC), and it tends to be worth it: Think of it as buying time, literally.

Once you make the decision to file for an extension, the process itself is easier than you might expect, as an article on CNN explained. You can either mail in form 4868 (Application for Automatic Extension of Time To File U.S. Individual Income Tax Return), available for download on the IRS website, or e-file your extension form for free using Free File (also through the IRS website). After that, you'll have until Oct. 15, 2018 to file your taxes with all the necessary documentation.

There's nothing scarier than feeling like you're not going to be ready for Tax Day, but you don't have to panic or lose hope. You just have to take control of the situation and address it head on. Ignoring it entirely could have serious consequences, as Mark Kohler, CPA and senior tax adviser at TaxSlayer, told CNN.

"If you don't file on time and don't file an extension, you increase the chances of an audit," he said, "because the IRS doesn't know what you're up to."

So don't freak out! Just take a deep breath and dive right in. Whether or not you decide that filing for an extension is right for you, the more you know about your options, the better. Just because the IRS doesn't like to be ignored doesn't mean they're not willing to work with you. And if you need help, don't hesitate to reach out to a professional!