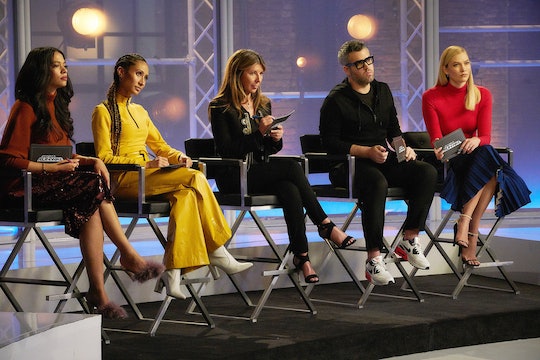 You Can Now Buy 'Project Runway' Looks For Yourself

The best part about Project Runway is getting to see the clothes after multiple stages of design and production. On the show, it all comes together in the span of an hour, but in real life, these designs probably take a little more time and you can't help but admire these hopeful designers for their talents. And after watching the show all season, eventually you have to wonder how to buy the Project Runway looks, because just watching them on TV isn't always enough.

Some designs featured on the show used to be available in-store at JCPenney, but shortly before they filmed the most recent season of Project Runway All Stars ended, the department store ended their partnership with the franchise. But just because you can no longer head to your local mall or free standing JCPenney and find your favorite designer’s look in person, that doesn't mean you can’t buy one of the designs for yourself.

You can find some of the designs from Project Runway’s most recent season on the Nineteenth Amendment website. Unfortunately, right now the website doesn't have every design from every episode, but you can find the winning looks from Episode 1, 5, 7, and 10 from this season. It’s not clear yet if more designs will be available for purchase after the season is over, but there are a few collections to sift through.

Right now, you can pre-order Tessa’s apron top and glaze pants from Episode 1, which won her the first design competition of the season. The top and pants are available for $125 and $135 respectively and come in sizes from extra small to 5X. You can also pre-order Bichme’s bomber jacket and matching pants from Episode 5 and they too come in a wide range of sizes meant to provide comfort and fit for almost anyone. Or, if you’re currently obsessed with Jamal’s plaid summer dress from Episode 7, you can also pre-order that online. Since Project Runway Season 17 Episode 10 hasn't yet aired, the winning designs aren't yet available to pre-order online, but they are expected to be live on the website shortly after tonight’s episode.

Some of the designs that Project Runway contestants create verge on the outrageous, but others, like the ones currently available for pre-order, are totally approachable. And, apparently, affordable for the most part. You are also getting one of a kind designs that could have been made by the season’s winner, depending on how Season 17 ends.

While the next big thrill of these designers’ careers after appearing on Project Runway is likely having their designs for sale to the public, the show has done a lot more for the contestants over the years. Christian Siriano, who won Season 4 and returned to the show this season as a mentor to the new batch of contestants, went on to work New York Fashion Week more than once and style stars like Kim Kardashian West, Michelle Obama, and Angelina Jolie. He even had a shoe line with Payless, and all after competing on Project Runway at just 20 years old.

Leanne Marshall, who won Season 5, went on to also have designs appear in New York Fashion Week and launch an international bridal collection. And Season 6’s winner, Irina Shabayeva, launched her own bridal line for Kleinfeld’s in 2011. Clearly, there’s a lot to be gained by making it far on Project Runway and having designs available for viewers to buy just scratches the surface.

At this time, you can’t buy all of the winning designs from Project Runway, but there’s still time for that to change, especially once the season ends.