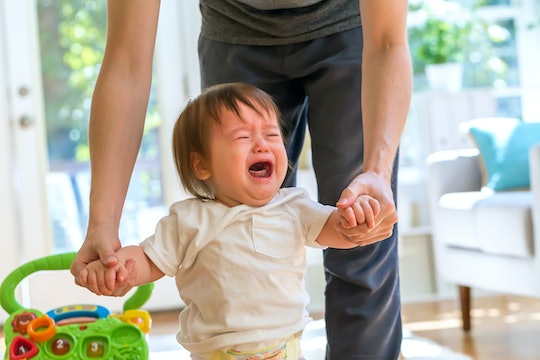 Every day, your toddler discovers something new to be excited about, truly relishing the small stuff that we adults often overlook or take for granted. But all that burgeoning independence comes with an abundance of feelings, too. As parents, we're right there on the front lines to witness the full range of our child's varying emotions, from the highest highs to the lowest lows (sometimes daily). In those low moments, how do we deal with big feelings in children (i.e. temper tantrum, meltdown, tears galore)? And is there a way to help prevent an eruption of feelings in the first place?

First and foremost, understand that part of your child's issue is likely their frustration over not yet being able to articulate how they're feeling.

"When toddlers get frustrated they often have tantrums," Dr. Dyan Hes of Gramercy Pediatrics in New York City explains in an interview with Romper.

"This happens for a variety of reasons, starting with their inability to find the words to express how they feel. Even toddlers with a good vocabulary become overstimulated and the words fail them. They begin to cry and throw themselves on the floor and often throw toys or objects."

While this behavior can be frustrating for parents, it is important not to lose your cool (speaking from experience, I know this is easier said than done).

"Yelling at your child to stop will only make it worse," Hes adds. "It is best for a parent or caretaker to remain calm and say quietly that this behavior is not OK. Then, the child should be ignored. Parents often worry that their child will hurt themselves thrashing about but this almost never happens. When it hurts... they stop."

This tough love approach usually worked for me when my children were little, and I remember having plenty of feelings myself in the moment; generally guilt mixed with frustration until we came out on the other side, and my toddlers were back to being their happy selves again. But it's one thing when you're in your comfort zone at home. What happens if your toddler's big feelings implode when you're out in public? Dr. Hes advises using the same tactic here as well. "They are looking to get a rise out of you, and when this is not the response, they learn quicker that this behavior is not working. You can remind them to take deep breaths, calm down, and use their words," she says.

And while we may not always understand just why the tantrum is occurring in the first place, as illustrated above, one culprit to be on the lookout for is transitions. As in, toddlers don't like them. Hes suggests giving your child a heads up that "playtime will be over in 5 minutes," or whatever activity your toddler is involved in at the moment. This alert is a gentle prompt that a transition is coming, so your child can prepare in advance. Other tactics for avoiding meltdowns include giving your toddler a choice in decision-making, helping your child learn new skills and picking your battles, according to Kids Health. Maybe wearing socks isn't such a deal breaker (and nothing like a cold day outside for mama to prove her point).

As your child approaches 30 months, if you notice she's having multiple temper tantrums a day both at home and school and not cooperating with routines like getting dressed or picking up toys, you may want to address this behavior with your pediatrician. Sometimes these children need coaching on how to process their emotions. (Just like some grown-ups.)

Dr. Dyan Hes, Medical Director of Gramercy Pediatrics in New York City and a Director of the American Board of Obesity Medicine

More Like This
17 Best Potty Training Products For Toddlers
26 Toddler Lunch Ideas They’ll Actually Be Excited To Eat
Should You Be Giving Your Toddler Melatonin To Help Them Sleep?
34 Instagram Captions Perfect For Preschool Graduation Photos