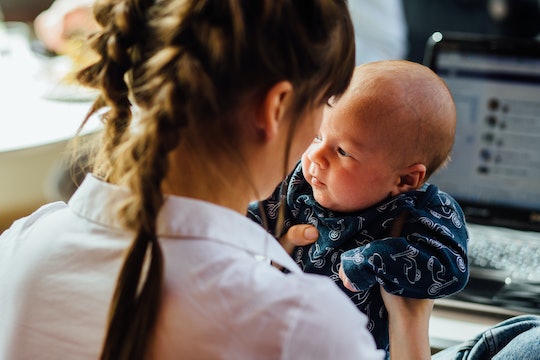 They say it takes a village to raise a child, but what happens when that village becomes judgmental, combative, and shaming? At a time when we share so much of our personal lives — including our parenting decisions — online, more and more mothers are finding ourselves defending our decisions from, of all people, other moms. In Romper's third episode of Bearing the Motherload, "Helpful Advice vs. Intrusive Input" (which you want watch below), two moms and two experts debate whether sharing opinions about other people's parenting decisions online is helpful, or harmful, or a little bit of both. There's no doubt that at times, it can be difficult, but thankfully, there are strategies for how to deal with online shaming that can give every overworked, exhausted, anxious parent the best of both worlds: the chance to share their parenting lives with their online communities, and the ability to shut down the haters when the judgment becomes overwhelming.

As a mother to a 3-year-old son, I have experienced call-out culture via the internet more times than I care to count. The worst experience, however, occurred after I posted a picture of my son sitting on Santa's lap. It was the holiday season. My partner and I live far away from our extended family members, and we wanted to spread a little holiday cheer by way of our festive-looking child. Another mother attacked me online, accusing me of taking away my son's bodily autonomy by placing him on a stranger's lap for all of two minutes while some underpaid photographer snapped a few measly pictures. The back-and-forth discussion that ensued turned hurtful, accusatory, and demoralizing. From then on, I vowed to keep posts about my parenting to myself. Of course, I broke that vow a few days later.

Parents who are openly judgmental, and have very strong, sometimes hostile views about topics are very — on the flip side— insecure.

Social media anxiety is real, and according to anxiety.org, it feeds our self-consciousness, perfectionism, fears of personal failure, and, of course, our FOMO (the fear of missing out). Rachel Kazez, therapist and founder of All Along, told Teen Vogue that while it's not an official psychiatric diagnosis, social media-induced anxiety and depression is, in fact, very real. Those feelings, according to Dr. Judith Joseph, the child and adult psychiatrist featured in Romper's episode of Bearing the Motherload, leave parents feeling insecure and looking for validation. And while there are sometimes reasons to question another parent's decisions, social media saturation and the almost uncontrollable urge to compare ourselves to others plays a large part in creating call-out culture.

"Parents who are openly judgmental, and have very strong, sometimes hostile views about topics are very — on the flip side— insecure, and they're looking for validation," Joseph tells Romper. "Parents who are more on the quiet, confident end of things are a bit more sure of their parenting styles, and they know their kids better."

So the first step in successfully navigating call-out culture is realizing why it exists in the first place. Rude, judgmental, mean-spirited comments about a person's parenting decisions are, usually, coming from a place of insecurity. "Remind yourself that what you're feeling is what the other person is projecting onto you, and it's often 10 times worse," Dr. Joseph advises. When attempting to overcome shaming comments from another parent, approach the situation from a point of empathy, and practice putting yourself in someone else's shoes.

If you allow space for feedback, and convey your disagreement in a respectful way, call-out culture could actually help two different people better understand one another.

Meredith Shirey, the child and family therapist also featured in this episode, recommends that parents manage their expectations when posting about themselves, their lives, and their children online. "Bottom line, have some self-awareness and be cognizant of who your audience is," Shirey tells Romper. "If your audience is all moms and you're posting something that's controversial, keep that in mind, tailor your posts and your responses, and think about the potential backlash."

Shirey does believe, however, that call-out culture can be beneficial, when done correctly. "It's fine to do in a respective manner, and it's important to know that if you do call someone out, you need to know they may respond offensively. So, just doing so with respect, and knowing that your opinion is not the absolute truth," says Shirey. In the end, it's perfectly fine (and healthy!) to have your own set of opinions, and to express those opinions to a wide variety of people. "Remember, your opinion is based on your reality and your experience and what you're going on in life," Shirey points out. If you allow space for feedback, and convey your disagreement in a respectful way, call-out culture could actually help two different people better understand one another.

Six in 10 mothers of children ages 0 to 5 say they have been criticized about their parenting decisions, according to a 2017 report from C.S. Mott Children's Hospital. So it's safe to assume that regardless of your social media activities, you're bound to experience shaming from time to time. When you do, Joseph's number one piece of advice doesn't have anything to do with social media at all.

"Every day, I tell parents I work with to start the day with something positive," she says. "Start the day with something that makes you happy. I am a strong believer in positive affirmations. Every day I stand in front of the mirror with my daughter and say positive things that we really admire about ourselves. So even if you have low self-esteem, keep it positive. And sometimes people need to do that multiple times a day, because there's so much negativity at work or when they leave their home."

And yes, self-care is helpful here. Joseph also suggests aromatherapy, music, or "exciting" your senses with something comforting, like a soft blanket. "There's nothing wrong with having some dark chocolate ... or looking at things that are pleasurable to look at, like a picture of your family or a picture of your child accomplishing something, so you remember that you're not a bad parent," she says.

You can also, of course, confront the person who is constantly shaming, judging, or otherwise criticizing your parenting decisions. Shirey reminds parents that it's OK to cut people out of your life, and it's OK to create boundaries. "Just because your kids are in the same classes with that judgmental mom, doesn't mean you need to have a relationship with her," she says. Shirey explains to parents that when they're their best selves, they can be the best for their children, explaining, "It's not healthy to go around and appease other people, especially if they don't matter in the grand scheme of things." So consider the source of the judgment and shame, and if that person really isn't a vital part of your life in any substantial way, don't be afraid to show them the proverbial door.

For her part, Joseph believes that facilitating a conversation about judgmental or hurtful comments is the only way to, eventually, end call-out culture altogether. "Sadly, the brunt of the work is on the more aware parent ... telling someone how they made someone else feel," she says. "That conversation is shocking for parents that are projecting shame and insecurity, too. When they hear it, it's really powerful. So in a non-judgmental, non-shaming way, if you call out that behavior, that can change not just one family, but two."

Navigating interpersonal relationships is rarely easy, especially with the anonymity and disconnect that social media offers. But, in the end, if you manage your expectations, be aware of your audience, practice self-care, and set reasonable, healthy boundaries, you'll be able to share your parenting experiences with others — without the side-order of guilt.

More Like This
Katrina Scott On Being First Pregnant Model In Sports Illustrated’s Swimsuit Issue
Ashley Graham On The “Fun, Organized Chaos” Of Raising Twins
These Stepmother's Day Instagram Captions Are Straight From The Heart
Stepmom Quotes & Sayings For Every Occasion