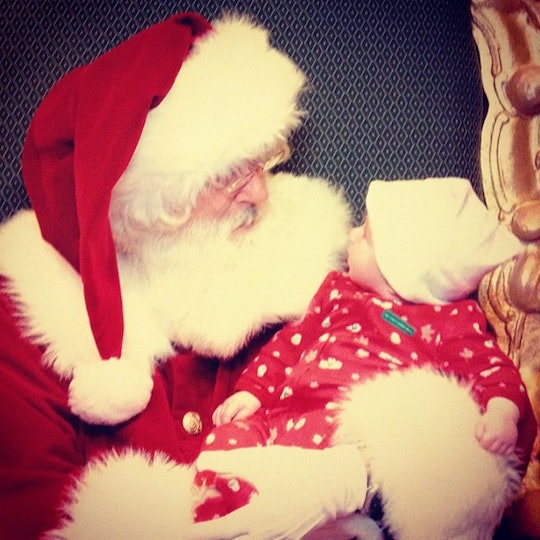 Why Do We Let Kids Sit On Santa's Lap? The Tradition Dates Back To 1890

Going to see Santa at your local department store or mall is a childhood rite of passage. The tiny candy canes, telling Santa you've kept your room clean all year long, and taking a picture right after you explain, in implicit detail, which Polly Pocket set you want — it's a must for any kid. But, no matter how lovable of a guy Santa is, the whole tradition begs the question — why do we let kids sit on Santa's lap?

The tradition doesn't have exact origins. According to History.com, in 1841, thousands of children headed to a Philadelphia store to see a life-size model of Santa Claus, leading stores to believe that if they could offer shoppers a "peek" at a real-life Santa Claus, they would get even more shopping traffic. The first person to dress as Santa, according to The Enterprise, was a man named James Edgar, who donned the infamous Santa Claus suit in 1890 in his own store to make the children shopping happy. He is considered the very first department store Santa Claus.

But the tradition of sitting on Santa's lap? There's not a lot of information about how this facet of the Christmas season began. Did one Santa suggest that a child sit on his lap to share his wishlist? Did a kid take it upon himself to climb up? Or was this an action egged on by parents?

Nobody's 100 percent sure, but the one thing that's come across many minds is why parents let their children sit on Santa's lap at all. Doesn't this perpetuate rape culture? Isn't it a way to force your child into physical contact with, for all intents and purposes, a stranger?

Apparently, a lot of people think so. According to Parenting, some countries have considered complete bans on sitting on Santa's lap and Baby Center has noted that some believe it is a violation of children's rights.

So why is it even a thing?

Because Santa is a beloved character for a lot of children. The difference between letting your child sit on Santa's lap and forcing them to is a big one — your child gets to decide. If your child is terrified of Santa, yet you still put them in their lap for a picture, I can see where this is a violation of your little one and that it could perpetuate rape culture. But if your child is stoked to see Santa, is super excited to tell him all about the Hatchimal they just know they're going to get (hold steady, parents), and wants to climb into their lap, then what's the harm?

According to Mental Floss, background checks are a big deal for a lot of Santa Claus employers, so if safety is a concern, it's OK to do some research. But really, the bottom line is that if your kid is super happy to see Santa and wants to climb into their lap, there's nothing wrong with it. If your kid just wants to stand next to Santa, no Santa Claus is going to deny them that right or a picture (if they do, go straight to management). Mental Floss also noted that Santas hate a crying kid photo, too — they are there to make your little one happy. And if your little one isn't happy, then is it even worth it?

We let our kids sit on Santa's lap because it's a sweet moment to capture between a little one who fully believes in Santa and the big jolly guy himself. But the magic word is "let" and not "force". There's a big difference and confusing the two is what perpetuates rape culture. But denying your kid the chance to sit on Santa's lap if they really want to? Well, that's on par with Ebeneezer Scrooge.

More Like This
101 Advent Calendar Activities, From Books To Read To Cookies To Bake
20 Stocking Stuffers For Kids Under $20
Spread Some Christmas Cheer In Your Child’s Bedroom
13 Brilliant Gifts For Kids Obsessed With Music — Especially Singing Very Loudly