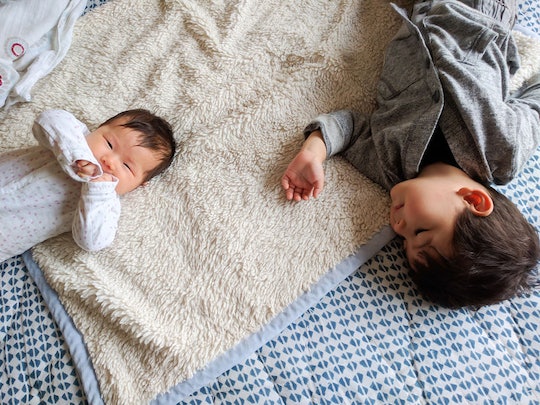 Welcoming a new member to the family is always an adjustment and sometimes, it's a rocky one. Not just for mom and dad, but especially for older siblings. I remember when my brother was born, while I was excited to bring him home, it took some time to figure out my new role as the big sister (to be honest, I really wanted a little baby sister to play with — but whatever, I'm not bitter). Being a new big sibling can bring on some serious jealousy. Here's how to deal with your first-born bullying the new baby, according to experts.

If you notice your first-born picking on your sweet little brand new babe, don't freak out yet. I checked in with experts Dr. Fran Walfish, family therapist and author of the book The Self-Aware Parent, and Mylee Zschech, a Child Behavior Specialist at Little Big Dreamers, to see what drives this unfavorable behavior, as well as how to handle this extremely common parenting challenge.

To a lot of moms, it may actually look like your first-born is bullying their baby sibling, but Dr. Walfish confirms this is just good old sibling rivalry.

"The real key reason why rivalry occurs between young toddler-aged siblings is they are vying for Mommy's attention which symbolizes her love," she says.

If you have siblings of your own, do you remember ever asking your parents who they loved more? (OK, I fully admit, I am 100 percent guilty of this one). If you did, then they likely gave you some less than satisfactory answer like, "I love you both the same," or something equally disappointingly neutral. Well, your first-born is kind of feeling like that. They want to know they're still special and still loved. They may even be wondering where they belong now that there's a new baby in the house. Dr. Walfish says these feelings can lead to jealousy and anger because it's "so very difficult to move over and give up (metaphorically) Mommy," — cue the tears (but not really because you just gave them a life-long friend and they will thank you later). Zschech agrees, saying "welcoming a new baby can be a big change for an older sibling. It can affect how they see themselves within their family and the family unit as they know it." With such big changes happening, it's no wonder your first-born may be acting like a "bully."

While to us, being mean to a baby seems completely unempathic and ruthless, "picking on a new baby can also just be general attention seeking behavior. They are still young and don’t know how to ask for the attention that they need," explains Zschech. There are lots of ways your first born might be trying to get your attention, such as by "not sharing, grabbing toys, saying mean, rejecting things, hitting and other acts of aggression," says Dr. Walfish. She also reminds parents that "toddlers have not yet mastered delayed gratification, respecting their peersneeds/wishes, enhanced language skills, and frustration tolerance," so it's important to be patient with your oldest during this tough transition.

Thankfully, there are some really great ways to help your first-born embrace their role as big sibling. Dr. Walfish suggests designating some special one-on-one time with your older children, even if it's just a few minutes each day. This special time should be something pleasurable for both mom and child, whether it's going for ice cream or even digging for worms. "The activity doesn't matter as much as the bonding that occurs when it's just the two of you," says Dr. Walfish. The adjustment can be hard for you, too, because your attention is spread even more thin than it already was, but Zschech agrees that "lots of love and cuddles can help with this. Letting them know that they will always be your baby can help too. It is important for parents to empathize with the feelings that may be behind their older siblings behavior when possible."

Overall, don't underestimate the power of some simple yet fun time together and make sure you're helping your first-born talk about their feelings. Maybe even include your eldest in helping to care for the new baby, which can help to facilitate bonding between siblings, too.

While it's really important to be sensitive and empathic to your now oldest child, it's also important to nip the bad behaviors in the bud and the key to that is communication. "Tell them what they can do, along with what they can’t do," says Zschech. For example, Zschech suggests explaining to your first-born that they can say they're feeling angry, but they cannot hit the baby because that hurts.

The bottom line is, "Older siblings need to know that they are still as important to their parents as they were before the new baby arrived and that they are not being replaced," says Zschech. So, double down on that one-on-one time with your first-born and help them learn their new role as big sibling.