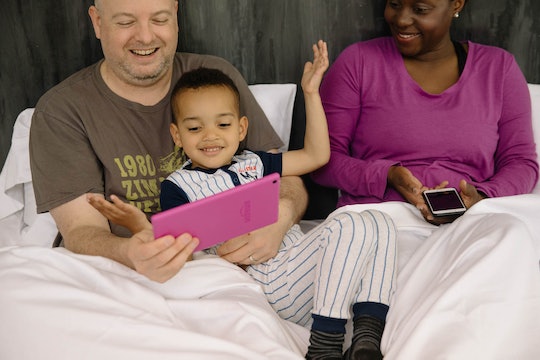 How To Talk About Gender Identity With Your Kids

Growing up in religious Ohio, there were "boy things" and "girl things," and that was it. I know many other parents also grew up in this binary and have had to evolve their language to match their convictions. You may struggle with how to discuss gender identity with your kids, and that's OK. The point is that you care enough to realize that language has an impact, and you want that impact to be a positive force for your children and the world at large.

More Like This
30 Cheap & Easy Summer Activities For Kids
This Is Why Your Toddler Wants To Feed You All The Time
What Parents Should Know About The New CDC Mask Guidelines
Is The Tooth Fairy Real?

Where do you begin? Is it a conversation you need to have with your children, or more of an open dialogue? Parents are the greatest influence on their children's lives, and that influence feels fraught and heavy at times. (This is definitely one of them.) Romper reached out to a licensed clinical psychologist who specializes in gender and sexuality, Dr. Lou Himes, PsyD, (they/them) of Queer Identities Psychology Partnership, and they were very gracious with their time and knowledge.

When I posed the question about what is the best way to talk to your child about gender, they were very definite in that it needs to be not just a conversation, but that the way children view gender and identity needs to start with the most basic aspects of parenting there is, and that is how you model your language and your behavior in front of your kids. Himes pointed out that it is up to you whether or not you're reinforcing gendered labels and if you're gendering activities and objects. For instance, are you falling into the pattern of "these are girls'/boys' clothes," or are you subconsciously steering your children in gendered directions by way of activity? Are you encouraging your son to play football and your daughter to take dance?

These are things that I know that I have been guilty of. I honestly didn't think twice about whether or not my daughter wanted to play soccer, even as I wore my Rapinoe jersey and screamed at the TV during the Women's World Cup. I just started her in ballet, because, well I have no idea why, I just thought "I have a little girl, and this is what I should do." Yet, she knew herself enough to tell me that she wanted to play soccer. Like, yesterday.

That was me. All me. That was me falling back into the patterns in which I was raised. I thought that because she loves dolls, makeup, and clothing more than any one child should, that she'd of course want to be a ballerina. Because I thought that, I didn't allow her the opportunity to truly be herself until she essentially head-butted a soccer ball at me at the park.

Himes tells Romper that this sort of child-led gender performance is essential and that this sort of miscommunication can be avoided if you don't place arbitrary gender limits that serve only to reinforce stereotypes instead of allowing your children to be fully and independently themselves.

However, Himes is also aware that children aren't always inside the gender utopia that may or may not be their own homes — they go to school, play on the playground, and will be interacting with all kinds of kids and adults, and some of those interactions will be full of gender stereotypes. Himes tells Romper that interactions like those are why it is crucial that children learn to question the social construct of gender as early as possible. Yes, they suggest that it is the duty of parents to inform their children that there are always going to be people with a limited understanding and acceptance of gender expression (and that kindness is not always expected), but if you as a parent model open and accepting behavior, children will learn from you, and be less apt to fall on the opinions of others. Himes notes that any questions that do arise should be handled with compassion and clarity, and to let the child lead. "How does that make you feel?" "What do you think about that?" at which point you become the beacon of kindness for your child.

Parents are going to make mistakes, and Himes notes that it's important that you don't fall into a trap of self-flagellation over it. Own up to it, give your child time to process it, and let them tell you how it makes them feel. They also say that even though starting young is ideal, it's never too late to start the dialogue. Parenting is as much about growth for the parent as it is for the child, and you're doing your best.

Himes suggests that above all, a child's experience is not gendered, but that the exteriority of the social construct of gender becomes internalized through experiences and contact with those closest to the child. It is the parent's solemn duty to help the child understand their experience, and imbue them with the knowledge that their parents are in their corner and will advocate for them no matter how they see themselves, and that is the case regardless of how the child may identify themselves in the future.

If you teach your children from birth that gender isn't truly definable in the way that physical sex is a designation, and that some boys love wearing fabulous dresses and lipstick and some girls love playing soccer and having short hair, then they in turn will be the next generation of advocates. If you need more resources for talking to your children about gender identity, you can check out the Gender and Family Project and Gender Spectrum.