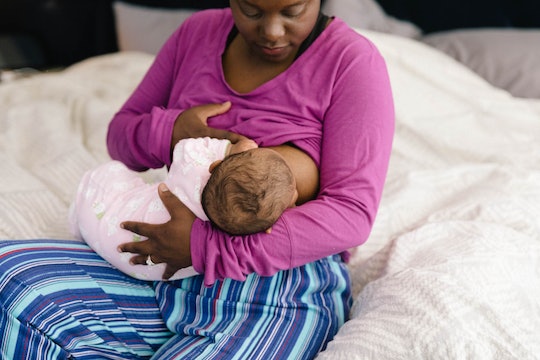 How To Do A Breast Self-Exam If You're Breastfeeding, According To Experts

When I was breastfeeding, I went from a full-fledged member of the itty, bitty committee to a solid B cup. I had no idea how to pull a sports bra over my new friends let alone analyze the various breast bumps and lumps that came as a result of being a 24-hour milk machine. But I still wondered what the difference was between a too-full milk gland and a swelling that was worth pointing out to my doctor. You too, huh? Well, knowing how to do a breast self-exam if you're breastfeeding is a pretty big deal and experts have some advice.

More Like This
Um, "Rusty Pipe Syndrome" Is A Thing, & Every Breastfeeding Mom Should Know About It
Are You Breastfeeding & Also *Starving* At Night?
How To Keep Your Toddler Busy While Feeding Yet Another Human
Here's The Deal With Biotin & Breastfeeding, According To Experts

“The breast may be more lumpy while nursing so doing self breast exam may be more difficult," Dr. Yvonne Bohn, an OB-GYN at Providence Saint John’s Health Center in Santa Monica, California, tells Romper in an email interview. "If there is a firm mass, this may be a blocked milk duct. This should resolve with pumping, nursing frequently, and massaging with a warm compress after a few days. If a mass persists after these activities, then it is important to see the doctor to ensure if it is a plugged duct or to determine if it is another tumor of the breast unrelated to breastfeeding."

Dr. Salli Tazuke, OB-GYN and co-founder and co-medical director of the Colorado Center for Reproductive Medicine in San Francisco, California, explains that because milk ducts fill up and engorge during breastfeeding, the breast itself can feel rather lumpy.

"This makes detection of abnormal lumps or masses more challenging," she tells Romper in an interview. "If there is a lump that is tender and red, then that can be a sign of mastitis and can quickly become a serious infection and should be alerted to the physician right away." Tazuke says, however, that in general a clogged duct or mastitis can be alleviated with regular pumping to clear the ducts, a heating pad, and/or antibiotics treatment.

Abby Reichardt, a student midwife at The Florida School of Traditional Midwifery points out that a breast self-exam isn't technically recommended anymore, even though many care providers think it's a good idea to "know your normal."

"During breastfeeding, there is no real point to breast self-exam because the tissue changes and ductal changes are so frequent," she tells Romper in an email interview. "If someone has a personal history or genetic predisposition to breast cancer, then they should be getting routine mammograms with a radiologist."

If you do want to try an exam, then you'll want to wait until at least one week after menstruation to do so. And, as Tazuke points out, it's also best to try and detect lumps after breastfeeding or pumping when you have drained the milk ducts. "Still, it is challenging to detect a lump," she says.

When you've done that much, lie flat on your back and have a cloth nearby because you may end up expressing some milk when you do the exam. Place your right hand behind your head, and use at least three fingers of your left hand to move the pads of the fingers gently over every part of the breast, according to Parents. Move fingers in small circles in an up-and-down pattern over the breast, including the nipple. Do the same on the other side, taking note of any lumps that you want to discuss with your healthcare provider.

Of course, if you are anything like me, then your post-breastfeeding boobs will somehow end up being even smaller than they were before. So not only will you reclaim your AA bras, but you'll also be right back into your old self-breast exam routine before you know it. Win, win.