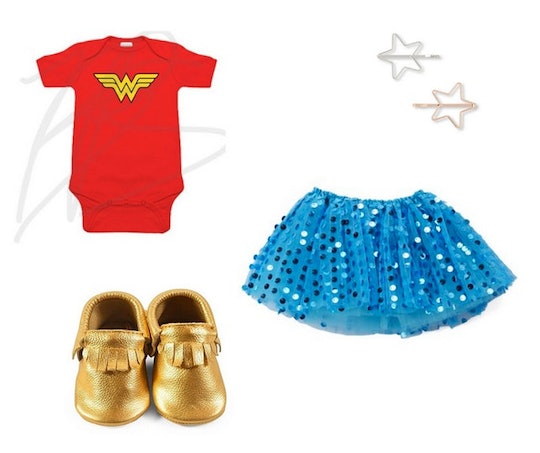 How To Dress Your Baby As Wonder Woman For Halloween

This year, women from all over raved over the new Wonder Woman movie. It gave them hope, happiness, and a strong, confident woman figure to adore. The movie quickly became a sensation among moms and young girls alike. So, if you're as into this movie as I am you might be wondering how to dress your baby as Wonder Woman for Halloween. Luckily, there are a lot of fun, simple, and adorable ways to recreate the Wonder Woman costume for your little one this Halloween.

Wonder Woman is one of the most (if not the most) famous heroines of all time – in both the comic books and movies. She first emerged in 1941 and made a comeback in the 2017 Wonder Woman film, flawlessly played by actress Gal Gadot. She even filmed the role while pregnant, like many other actresses before her, which is pretty awesome in my opinion. It's an understatement to say that she's been one of the greatest inspirations and movies of the year.

It's also interesting to know that "aside from Superman and Batman, no other comic-book character has lasted as long," according to Smithsonian.com. The site continued, sharing that Wonder Woman is "psychological propaganda for the new type of woman" who should probably just rule the world altogether. She's kind, smart, strong, and confident, and best of all, she really is out to save the world in the new movie. What's even more inspiring is her spirit and unwillingness to give up – despite those around her that are set in their ways.

I can't think of a better comic book heroine that I'd like my daughter to grow up watching and loving, and if you want a fun baby costume this year that makes a statement, Wonder Woman is a really good option to explore. The great thing about baby costumes is that they don't always have to be complicated, and it's not too hard to seek out some pretty good options in stores nearby or online for your baby's Halloween look.

So, if you're hoping for a fun, quick, yet stylish Wonder Woman costume for your little one this year, here's a step by step guide to recreating the heroine look this Halloween.