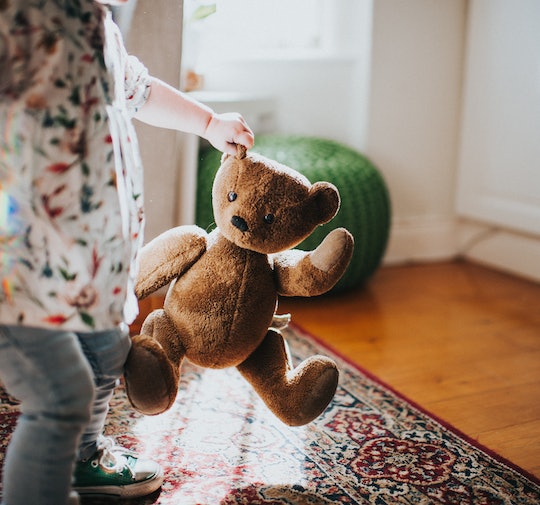 Where Do All The Lost Loveys Go?

Five-year-old Oren Lev in Pittsburgh is famous for his love of his “Raggy.” Raggy is a promotional towel that was given out when his family toured the Alcosan Sewage Treatment plant in 2015 (yes, this is an actual thing people do), and became real when Oren adopted it as his lovey.

His mom, Katy, worried that the small towel was becoming too worn to do its primary task of whizzering — the process in which Oren rubbed the tag to self-soothe. She also feared the much-loved item might be lost, devastating her toddler. She contacted the sewage treatment center — oh, motherhood — to ask for a spare. They sent her an entire case of new woobies. At the 2017 open house, all of the employees could not wait to meet Oren and his beloved Raggy. They even offered him a 2017 updated sewage treatment towel, but he informed them that the new tag was not right for whizzering and declined their offer.

Oren is not unique in his obsession with a specific lovey, or comfort object. “Growing up is no small feat, and as young children develop, they become increasingly aware of just how big the world is,” says Dr. Rebecca Hershberg, early childhood psychologist and author of The Tantrum Survival Guide. And that’s where comfort objects come in. “Loveys in particular are soft, and warm, and smell like mommy, or daddy, or their crib,” she says. “They are reminders (not only cognitively, but also physiologically) of safety.” They help little minds transition “smoothly.” Except when they go missing.

Many parents have raced through a plaza or flipped over the couch cushions at bedtime searching for a stinky, worn bunny, or silk robe tie. What makes the child love that toy so much is likely its odor — and that’s normal. Hersberg explains that it is perfectly developmentally appropriate if your child prefers their lovey with some stink. “Replacement loveys — or even thoroughly washed ones — just don’t cut it. They may look and smell better to parents, but they’re lacking exactly what makes them so valuable — their worn-in feel and familiar odor.”

What happens then, if that beloved object is actually missing, in a large public space? Romper employed its best investigative journalism skills to find out. Where do all the lost loveys go?

If it’s something of sentimental value like a lovey, well, they would have to have an officer take a lost property report to Evidence Control. —detective sergeant in the Baltimore Police Department

Two Baltimore policemen agreed to take time out from their shifts to talk about the fate of lost loveys in a large urban area. They were not able to provide their names due to the sensitive nature of their work. A detective sergeant shared how difficult it is to actually keep track of and store personal items in such a large city. Smaller jurisdictions can keep Stinky Fox on the front desk until a parent checks in to claim it, but in larger cities it just doesn’t work that way. “Anything found gets submitted to Evidence Control,” he says. “They would have to prove ownership if its monetarily valuable, but if it’s something of sentimental value like a lovey, well, they would have to have an officer take a lost property report to Evidence Control.”

No small task in a city with a busy police force. The second officer corroborated the detective sergeant’s narrative, but reminded me that they have “actual murders” and missing person cases to solve. You know, more important things than where is Walrus Beanie Boo? (Obviously they aren’t the ones trying to wrestle a toddler into bed without Walrus Beanie Boo. It’s a true hostage standoff situation.)

What about when lovey goes camping? There is no greater opportunity to lose your kid’s rag than in the great outdoors. Not only are wild animals attracted to a rotting stench and likely to pilfer that beloved one-eyed stuffed penguin, but any family outing that involves packing and shuffling lots of items is prime time for a lovey crisis.

We would ... take the item to our office for storage and perhaps find who had the site last and give them a courtesy call to say it was found at the park. —Ryan Dysinger, Pennsylvania Bureau of State Parks

Ryan Dysinger, assistant director of the Pennsylvania Bureau of State Parks, tells Romper that they have an actual procedure in place for lost sentimental items across the 300,000 acres of state parks. “For items worth less than $50, they are stored at the park for about six to 12 months passes and then they are disposed of,” he says with the tone of someone who knows the natural order of things. “Certainly, if a child’s blanket or teddy bear was left behind from a stay in our cabins or cottages and was found by staff, we would ... take the item to our office for storage and perhaps find who had the site last and give them a courtesy call to say it was found at the park.”

That knotted-together crochet baby blanket might not reach the $50 threshold of value the park sets for lost and found, but it’s worth more than gold to the child missing it after their camping trip.

What about if your child loses their lovey at the happiest (most crowded, hectic, and busy) place on earth, Walt Disney World? Disney has an entire team dedicated to finding lost items. They even have an online reporting system, though they did not respond to a request for comment. High-value items are held for 90 days, while sentimental items, like loveys, are held for only 30. Report your item lost right away! It will likely be high on your to-do list anyway as your child wails themselves to sleep without their stuffed Eyeore-dressed-as-a-butterfly.

Janice Alaire still remembers when her daughter lost her beloved white bear as it was tangled up in a sheet change at the Polynesian. “When we returned from the Magic Kingdom for the day, you could hear her agonizing cries throughout the resort when we realized bear was not there.”

The resort told Alaire to take her daughter to the gift shop and direct her to pick any stuffed animal that she wanted, but, as most parents know, this did not alleviate the sadness over the bear that was missing. The next day, the front desk called to let Alaire know they had found the bear, a bit worse for the wear from going through a commercial laundry system. “She is 32 now, still has the bear, but he doesn’t travel anymore,” she says. Too risky.

What's important is to first acknowledge how sad and accept how sad it is. —Marie Kondo

Sometimes adults in the hospitality industry get very excited at the prospect of being involved in a beautiful reunion story. Staff at InterContinental Hotels Group clamored to share their favorite stories and photos of lost loveys on "adventures" before they were returned home to their kids. Most of the time, if a lovey is found in a room, the owner can be tracked down and the special friend returned — usually after their adventures are chronicled first.

Sometimes, though, a toy is found that clearly has sentimental value, but no one knows who it belongs to. IHG’s Staybridge Suites in Rapid City, South Dakota, worked hard to reunite the below giraffe with its family, eventually turning to social media to document the giraffe’s adventures, which were then spotted by his family. As much fun as he was having in Rapid City, he was happy to get home to his little girl.

The story is proof of two things: 1) a lost lovey is a common childhood disaster, and 2) staff and volunteers around the globe treat these loveys with an abundance of care. Nothing unites humanity quite like a stuffed toy separated from its kid.

And no one is immune. In a recent interview with Romper, Marie Kondo talked about how she helped her daughter handle her lost Sheep. “What's important is to first acknowledge how sad and accept how sad it is and how disappointing that is,” Kondo said. “But afterwards, I think simply reflecting on the good times that you did share with your lovey.” Romper editor Janet Manley showed slightly less chill, posting a cry for help on Twitter when her daughter lost longtime family member Bunny.

Hershberg notes that while most adults don’t use a lovey anymore, many of us did at one point. “As grown-ups, we are better able to self-soothe than children, but we still have certain objects — textures, smells, et cetera — we rely on for comfort.” On the way to becoming the highly evolved emotionally stable wunderkind that you are, children use loveys to manage their big feelings, hence the profound sense of loss when they find their toy missing at bedtime.

So if that smelly blanket goes astray, acknowledge the severity of the loss, and by all means spring into action (call the police if you must!), but above all know that your child's lovey is part of a grand adventure.

Author’s note. The author’s 8-year-old son wanted his mom to include the amazing story of how his beloved Taggie returned home after a hotel found it a month after their trip.

The sad fact is though, the hotel never found it. Despite numerous calls, a dedicated cleaning staff continuing to look as snow melted in the parking lot, and social media blasts that had random moms tramping around the snow drifts looking for Taggie, he was not recovered.

Instead, the author got a new Taggie. She soaked it in coffee, then mud. She beat it against the bricks of the house and then ran it over with her car a few times. She burned a hole in it with a hairdryer to recreate the damage that resulted from the Great Stomach Bug of 2013, when Taggie was hand-washed and ineffectively dried with a hairdryer, leaving circle scorch marks in his green velour. Grandma then took the new-old Taggie, slept with it for a week to give it that body stink, and mailed it back with fake hotel letterhead. So, this ineffective story of a lost lovey did not make this piece, but it remains the pièce de résistance of the author’s mothering career.