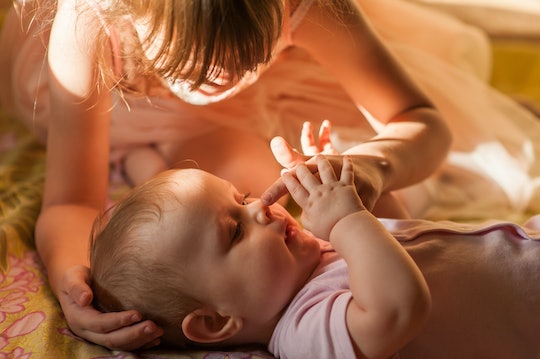 Here's What To Do When Your Kid Puts Something Up Their Nose, Because They Will

First of all, I’m very sorry to see you’re searching for how to get a small object out of a child’s nose. That sounds super troublesome and stressful and I'm not looking forward to that particular parenting milestone. Second of all, you’re definitely not alone in this because I think it happens to pretty much everyone.

In fact, Dr. Gina Posner, a board certified pediatrician at MemorialCare Orange Coast Medical Center in Fountain Valley, California, tells Romper that kids are simply just fascinated with holes, and that any orifices are free game. “They will stick fingers and other objects into as many openings as they can because of their natural curiosity and wanting to figure things out,” she says.

So what to do about it? Posner suggests performing “mother’s kiss.” No, it’s not like the Dementor’s Kiss from Harry Potter (even though you may want to at that time out of annoyance).

“You can watch YouTube videos on the 'mother's kiss,'" Dr. Posner says.

"Plug the unobstructed nostril and blow through the child's mouth. You will quickly discover that it removes a lot from your child’s nose.”

Other options include trying to fetch it with your fingers, but only if it’s easily visible, says Dr. Robert Hamilton, a pediatrician at Providence Saint John’s Health Center in Santa Monica, California, and author of 7 Secrets of the Newborn. However, Hamilton says the concern with this is that sometimes “a parent’s attempt to recover a foreign body results in it being shoved even deeper into the nasal passages. This happens frequently,” he says. “The mucous membranes of the nasal passages are delicate and tend to swell and bleed quickly. When a foreign body in pushed up into the nose, the trauma to the nasal membrane causes it to begin swelling immediately, thus, getting foreign bodies out of noses is tricky,” Hamilton says.

He adds, “Another option is to attempt to remove an easily observed foreign body with a pair of forceps. This too is tricky because children with foreign bodies up their noses don’t tend to be that cooperative. So forceps, which can injure a little nose, should only be used if the child is calm and not thrashing about.”

And if all else fails you should take your child to the pediatrician or the ER, Posner and Hamilton say. “Parents should not spend too much time trying these techniques because overaggressive efforts to dislodge a foreign body may result in significant trauma, even bleeding, and this can hinder the efforts for the physician to remove the object as well,” Hamilton says.

And the ER will definitely be able to get it out in a jiffy. In fact, I know somewhat first hand. Of course I didn’t do this (because I was a perfect child, ha), but when my cousin was 2 years old, he decided to take his older brother’s Ninja Turtle vitamin and shove it up his nose — on Mother’s Day. What a wonderful gift for my aunt, right? I remember he giggled and laughed the entire way to the ER until he realized he had to go back “to the room” and have them dislodge it. Let’s say he never put anything in his nose ever again — not even a finger.

So if your kid does have something shoved up their nose and the mother's kiss method, using forceps, or using your fingers doesn't work, please take them to the ER or pediatrician so they can safely remove the object. I bet they'll learn their lesson about never putting Ninja Turtle vitamins or anything else up their nose again.

Dr. Robert Hamilton, a pediatrician at Providence Saint John’s Health Center in Santa Monica, California, and author of '7 Secrets of the Newborn.'