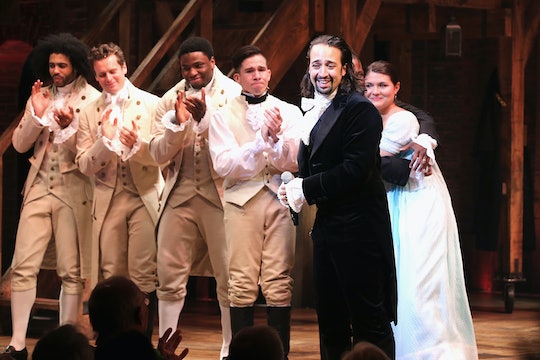 Dying to get tickets to Broadway's latest smash hit Hamilton at the Richard Rodgers Theater? Or were you a wide-eyed innocent like myself, assuming you could just sign on to Ticketmaster, pay a few bucks, and, Bob's-your-uncle, you're headed to a Broadway show? We're cute, right? Sadly, that's not how any of this works. So how exactly do you get tickets to see Hamilton?

It won't be easy (or cheap), but it's doable, if you really work for it. It makes sense that you would want to see Hamilton, of course. It's a story about Alexander Hamilton, one of the hotter faces on the dollar bill (he's the $10 bill which means you can buy at least two coffees with him). Created by Lin-Manuel Miranda, Hamilton portrays the life of Alexander Hamilton, set to some pretty fabulous hip hop music. It's based on the biography Alexander Hamilton by Ron Chernow.

Given that the show is sold out until fall 2016, the process to get a ticket is a bit trickier than your average show. Here's how the traditional ticket process for Hamilton works: About two to three hours before each show, you get to stand in the cold rain waiting to hear your name called as the winner of a ticket lottery, which gifts you with the opportunity to pay anywhere from $10 to $40 for a "standing room" ticket, according to The Los Angeles Times — and if you don't hear your name? You're out of luck. The ticket Gods won't tell you the show is "sold out" either, according to Richard Rodgers Theater spokesman Sam Ruby, who told the paper, "We're not in the business of saying it's sold out." (So I guess they're like those people who click "Maybe" on an e-vite. Just commit already.)

Of course, that's not your only option. While there will be some tickets available at the ticket office every once in a while, you can still purchase regular tickets online. Sadly, even those will likely be rather...scarce.

Here are your options: You can shell over some serious coin for regular tickets ranging in price (hold onto your seats, Broadway fans) from $311 for rear mezzanine to a mere $851 for orchestra seats. I personally think they should also consider accepting gold dubloons as a sort of nod to the times in the meantime, but that's just me.

With the cast from Hamilton set to perform at the 2016 Grammys on Feb. 15, I think it's safe to say tickets are going to get even hotter. Nominated for Best Musical Theater Album, the cast will be opening the award ceremony with a brief number from the musical, so anyone who can't nab a real ticket will still have the opportunity to get a taste of the show.

See? There's some good news in all that doom and gloom. As long as you've got regular old cable TV, even you can get a little Hamilton preview from home. In PJs. With a big goblet of cold wine. Gnawing on some chicken wings. In other words, exactly as the great Hamilton himself probably would have wanted it.