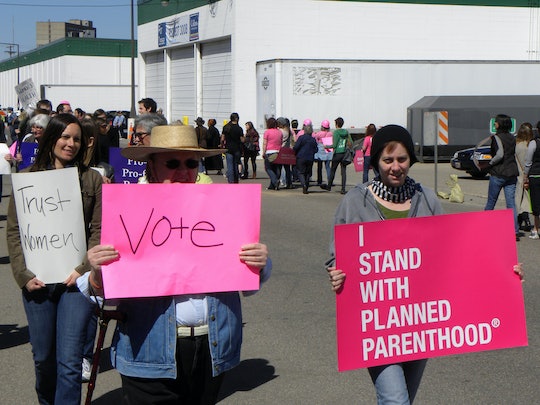 How To Help Planned Parenthood After The Colorado Springs Shooting

On Nov. 27, as shoppers nationwide hit the stores for Black Friday or went about emerging from their Thanksgiving food comas, a gunman fired into the windows of a Colorado Springs Planned Parenthood clinic, wounding three police officers and possibly others. (Update: After an hours-long stand-off, the shooting suspect has been detailed by police. Said Mayor John Suthers Friday, "The perpetrator is in custody. The situation has been resolved." Police later confirmed that three people had been killed and identified the suspected gunman as Robert Lewis Dear, 59, who is from North Carolina.) It's unclear at this point whether PP was the gunman's target, but regardless, the incident reminded employees and supporters of the women's healthcare provider of the many, many times abortion providers have been made the victims of violence. And it left many people wondering how to help Planned Parenthood in its hour of need.

For all of the vitriol against the organization uttered by social conservatives, the organization is beloved, as many tweets responding to the shooting showed. Planned Parenthood provides a multitude of women's health services, consisting mostly of providing contraception, STI testing, and screening for cervical and other cancers, but in some locations it also offers treatment of more general conditions, from gastrointestinal issues to hypertension, often in communities with no other point of access to this care. Abortions account for only 3 percent of services the organization provides to patients.

If you are deeply dismayed by the shooting at Planned Parenthood in Colorado Springs Friday and looking for a way to support the organization, here are some options:

This is the simplest and most straightforward option, and even a modest amount helps. As Dani McClain wrote in The Nation earlier this fall, "it’s easy to feel like your $5 or $10 donation is too small. Wrong. There’s still a great need." Also, it might be a better use of funds than some of the stuff on your Black Friday shopping list.

Even before the shooting Friday, Planned Parenthood was badly in need of support. The organization has had a particularly trying year, at least since a pro-life organization released a highly edited video that made it sound like Planned Parenthood doctors perform abortions with the goal of harvesting fetal organs for sale. In September House Republicans passed a bill that would limit federal funding to Planned Parenthood. If that bill passes the Senate, and Obama somehow doesn't veto it (unlikely), it will be more difficult for the organization to provide services that women around the country desperately need. And Senate Republicans are hell bent on defunding. So now is the time to contact your senator and let her or him know you want the funding to continue. Planned Parenthood has a helpful script you can follow.

Support Those Who Support Planned Parenthood

Shonda Rhimes took a major risk two weeks ago when Olivia Pope had an abortion on Scandal, the first abortion ever depicted on primetime network TV. Sing Shonda's praises whenever you can. Celebrities like Chrissy Teigen, Lena Dunham, Scarlett Johansson, and many others are vocal supporters of the organization. Like and retweet their social media posts supporting PP to encourage their advocacy. Lemony Snicket is a big Planned Parenthood donor. But all of his books and read them to your kids. The more you encourage people with considerable visibility and influence to keep fighting for Planned Parenthood, the more they will share the message with their fans.

If members of your own family or circle of friends persist in spreading misinformation about women's health providers, now's a good time to shut that down (especially if they insisted in doing it mid-Thanksgiving dinner). Take some time to present the facts about Planned Parenthood (especially the facts around the controversial Planned Parenthood video footage) in as unbiased a manner as you can. Even if you don't change their minds, you'll get them thinking about it.