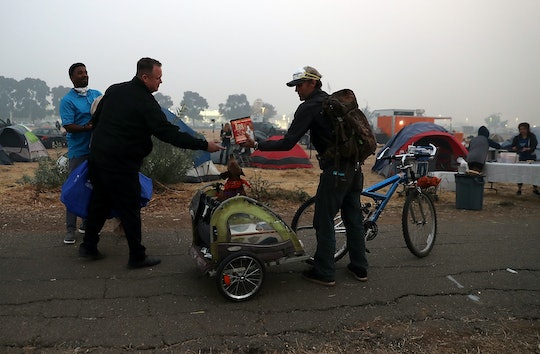 As millions of Americans prepare to celebrate Thanksgiving this Thursday, there are still thousands of wildfire victims in California who are simply trying to survive. If you want to do give back and also give someone something to be thankful for this holiday, here are a few ways to help wildfire victims this Thanksgiving.

As a refresher, three major wildfires broke out in California on Thursday, Nov. 8, according to Vox. Hundreds of thousands of people had to evacuate their homes, many homes were destroyed, and 79 deaths and 700 missing people were reported from the Camp Fire alone, as reported by NPR. Camp Fire (in Northern California) is the biggest of the three fires. As of Monday evening, Nov. 19, Camp Fire has destroyed more than 11,000 residences and more than 3,000 other buildings, it has burned more than 150,000 acres, and it is now 70 percent contained, according to official California government website Cal Fire.

The Woolsey Fire (in Southern California) has destroyed approximately 1,500 structures, burned nearly 97,000 acres of land, and as of Monday evening, it is 96 percent contained, as noted by Cal Fire. And finally Hill Fire, (also in Southern California), was the smallest of the three fires. It burned about 4,500 acres of land, destroyed four structures, and as of Nov. 16, it is 100 percent contained, according to Cal Fire.

But even though the fires are getting closer to being fully contained, many of the hundreds of thousands of people who had to evacuate their homes may have nowhere to go for the holiday. So with Thanksgiving just days away, here are five ways you can help those in need.

On Friday, community members gathered to host a Thanksgiving dinner for people who lost family or friends in the Borderline shooting, people who lost their homes in the Woolsey Fire, and First Responders. The dinner's organizers (the owners of Proactive Sports Performance, as reported by ABC7) partnered with their local YMCA to host the event.

Through the YMCA's website, you can still donate, and the funds will be used to purchase gift cards for the victims who attended the event.

2. Donate To This Former Firefighter Who Is Bringing Supplies From Washington State

Former firefighter and Spokane, Washington resident Miranda Detore has pretty awesome Thanksgiving plans. She is going to drive a truck filled with supplies to help wildfire victims from Washington state to California. “Personal friends of mine were being displaced and running for their lives. That hit me,” Detore told KREM2. Detore partnered with local fire departments to help her distribute donated funds, and you can donate to Detore's efforts via Facebook.

3. Donate Or Volunteer With The Red Cross

The Red Cross has shelters available for those displaced by the fires, and the organization's website also links to additional community shelters that have openings. A donation to the Red Cross right now will help support the shelters, which will give displaced people a place to stay during Thanksgiving, as well as other disaster relief efforts in light of the wildfires. If you are local, you can also volunteer with the Red Cross to help victims.

That said, there are many independently-run local shelters (as well as relief funds) that could also use donations right now. California news outlet Action News Now shared a list of local places people can donate. In addition to financial donations, some shelters are also accepting basic goods (including personal hygiene items, baby care items, food, etc.) from those who live nearby.

5. Foster A Pet Or Donate To An Animal Shelter

As of Nov. 12, Allison Cardona of Los Angeles County Animal Care & Control told NBC News that at least 10,000 pets had been displaced in the three wildfires. Shelters and sanctuaries have taken in as many animals as possible, and could definitely use assistance with the influx of new animals. If you are able, pets are available for fostering and adoption from places including MaeDay Dog Rescue and Los Angeles County Animal Care Foundation. You can also donate to those organizations, as well as others including the Pasadena Humane Society & SPCA, the North Valley Animal Disaster Group, and Caring Choices.

Everyone — including animals — deserves a warm home and full belly on Thanksgiving, and hopefully these relief efforts will help.

More Like This
Snooki Family Dinner Interview
The Addams Family Is Not Exactly As Kid-Friendly As You Remember
The Little Vampire Is Just Scary Enough
The Office Halloween Episodes: A Definitive Ranking