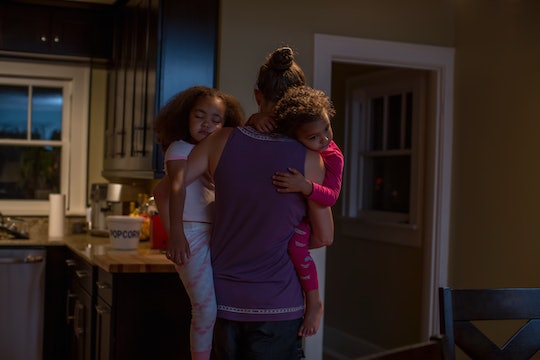 How To Know When To Ask For Help

Five years ago, Avital Norman Nathman seemed to have everything going for her.

She and her husband lived in western Massachusetts with their elementary school-age son. She had a successful career as an in-demand freelance writer and worked part-time for the Yale School of Public Health. Several years prior, she had published her first book. She had all her “plates spinning,” she recalls.

Then she got sick.

During the winter of 2014, Nathman began to have trouble holding any food down. She threw up so often that she lost 15 pounds in two weeks. “My heart would be clenched, I would be sweating from top to bottom, my arms and legs would shake — physically shake — like, I couldn't really walk,” she remembers. Sometimes, she felt so poorly that she was unable to get out of bed.

Confused and scared, she frequently found herself in her nurse practitioner’s office sobbing. “I got blood tests for everything,” she recalls. “I had MRIs, CAT scans, I pooped in buckets, I breathed into bags. I literally had chest X-rays, blood taken out once a week at that point.”

Her nurse practitioner assured Nathman that their office would do their best to diagnose her. But in the meantime, she suggested that Nathman start taking anti-anxiety medication to help manage her feelings around her physical health, and Nathman agreed.

It turns out that anti-anxiety medication helped a lot — so much, in fact, that her healthcare providers realized Nathman had been having physical symptoms of extreme anxiety.

“We realized I was having these intense panic attacks,” says Nathman, now 39. She still isn’t clear why such terrible anxiety struck her when it did. “It wasn't like I had some sort of traumatic event, or I was anxious about work or my family,” she recalls. “There wasn't a key reason, which ironically made me more anxious.”

The anti-anxiety medication took somewhere between four and six weeks to start working, Nathman explains. And that came after the weeks she had spent feeling sick in bed. Overall, this bout of mental illness “took a good few months of my life,” she says. “It really knocked me down.”

During this time, Nathman had one way to make get through it: She had to ask for help caring for her son, then 8, and caring for herself.

‘We're the caretakers, we're the nurturers’

Despite the oversaturation of all things #self-care in the popular imagination, actually taking care can be a difficult ask for many women, especially moms. And for moms trying to launch and run businesses this is more acutely true.

“In our culture, it’s a point of pride that we’re so busy,” says Lindsay Powers, author of You Can’t F*ck Up Your Kids: A Judgment-Free Guide to Stress-Free Parenting, which publishes in March 2020, and co-founder of the #NoShameParenting movement. “Taking care of yourself is not valued.”

Parents, particularly moms, experience “more pressure than ever” to hold everything down, Powers continues. “We’re not only comparing ourselves to our own parents and neighbors, but everyone in the world on social media.”

Add that to the fact that many a mother feels like she is “solely responsible for the childcare,” explains Dr. Sheryl Ziegler, a psychotherapist in Denver, Colorado, and the author of Mommy Burnout: How to Reclaim Your Life and Raise Healthier Children in the Process. (Men who refer to watching their children by themselves as “babysitting,” we’re looking at you.)

Just because a mother feels like she is solely responsible doesn’t mean she actually is solely responsible, but moms know how much work goes into making lunch or taking a trip to the library, and some don’t want to ask others to take that work on. And those who work from home can find it harder to distinguish the boundaries between career responsibilities and home responsibilities. An overwhelmed mom can start to feel trapped — yet still think she has to power through on her own.

This struggle is compounded by structural problems: the scarcity of affordable childcare, as well as the patchy coverage of familial and social support networks. Ziegler references what she calls a “loneliness epidemic” and the fact that many parents are raising their kids without their families around for support. “Asking for help is almost more important than ever,” says Ziegler.

Overwhelming circumstances and a lack of support can cause moms to feel burnt out. This is a serious problem on its own, but often a precursor to mental health issues like depression and anxiety as well.

“Burnout is the physical and emotional exhaustion that results from whatever your occupation is — in this case could be parenting — which leaves you feeling cynical … physically tired, emotionally tired,” says Ziegler.

To cope with overwhelm and burnout, social connections are absolutely crucial, says Ziegler. A play group, a cooperative childcare group, or a carpool help take the pressure off parents from doing everything solo. They also provide a community that can be there when a mom needs to ask for extra help. (Ideally they should be created before overwhelm or burnout happens.)

Nathman recognizes she is fortunate that she could turn to her husband for empathy and understanding when she got sick. His just being there as a witness to her pain helped a lot, she says. However, he is a pharmacist who sometimes has to work 12-hour shifts. And his work took on an extra importance for the family’s income during that time.

“I physically couldn't focus or sit up in bed,” she recalls, explaining that some days she could not work at all — and freelancers don’t get paid time off. “So we took a hit financially and that was really upsetting and frustrating.”

Nathman is grateful that her freelance clients were understanding of her illness. And having supportive colleagues is still crucial today as she adjusts her medications.

“I can go into work Slack [a chatroom] and say, 'Hey, I'm having a really bad reaction to these meds today, I'm going have to be offline' and not worry about anyone thinking I'm slacking off,” she says. “I know I'll be supported and I'm not the only one."

She also turned to the people around her. On days when her physical symptoms were particularly bad, she asked friends and neighbors to pick up or drop off her son from school. “I might say ‘I'm pretty sick right now, I can't get out of bed, is anyone able to to do carpool?’” Nathman recalls. They were happy to help because “we've cultivated a community here that steps up,” she says. “And we do the same for our friends when stuff like that happens.”

The key word here is community. Ziegler warns against an over-reliance on online forums or social media groups, which can make it harder to build connections in real life. Modern moms may feel technologically connected to friends in different zones, she says, but socially isolated to people in their neighborhood.

She suggests creating such a community if it doesn’t exist already, and using existing technology to your advantage. She cites local Facebook groups and NextDoor as two ways to find other parents nearby. But it’s crucial to move budding online friendships off-line, she says: “Make sure that the things that you're doing to your advantage involve a lot of face-to-face time.”

Because in good times or in bad, no one can shoulder all the responsibilities for their families alone.

‘Nobody mothers the mother’

Being a mom is hard, period. But a particularly difficult time in a woman’s life is during and after pregnancy, when perinatal mood and anxiety disorders (PMADs) can appear.

Despite the commonality of PMADs, women can feel threatened by the stigma of mental illness, says Jen Schwartz of Charlotte, North Carolina, founder of Motherhood Understood, an online community and story-sharing hub for moms around mental health.

“It can be really scary to ask for help, because there's a shame attached to it,” Schwartz says. “It's almost like being a good mom has been become defined by this self-sacrifice, doing it all on our own, powering through, thinking that everybody else is also powering through and smiling.”

A big part of being able to ask for help is not comparing yourself to other parents, and realizing that even the ones who appear to have it all together might be struggling with anxiety, depression or other issues.

“Women don't speak up because they're embarrassed,” says Alex Winkelman of Austin, Texas, founder of Hello My Tribe, a platform and community addressing the need for a support system. “They have all this guilt and shame that [motherhood] is not what they expected: It is not blissful, it is not butterflies, it is not easy. It is not this wondrous thing that we're sold.”

Ironically, pregnancy is one of the times during a woman’s life that people do offer help. “We're coddled and everybody cares so much about us when we're pregnant,” Schwartz says. “But when the baby comes, who mothers the mother? Nobody mothers the mother.” And help can drop off as time goes on.

Establishing “a village” of trusted neighbors and friends, as Nathman and Ziegler advise, becomes important when help is needed. Schwartz recommends asking for specifically what you need, especially postpartum, when many people want to see the baby. Some suggestions could be asking friends to set up a meal train, sharing the phone number of a reliable babysitter, or handling the laundry.

These are all perfectly reasonable requests, and they have the potential to improve all areas of your life: “sleeping better, feeling better, having a better relationship with your partner, enjoying your time with your baby or your children more,” says Winkelman.

These days, Nathman is feeling better on the whole. She has been adjusting her anti-anxiety medication since the summer, which has caused unpleasant physical symptoms to flare up, and she still has good days and bad.

Even with a loving spouse, parents who live an hour’s drive away, and a supportive group of friends, seeking support required vulnerability. “It's a lot to ask for help,” says Nathman. “It's very brave.”

But it was worth it — not only for herself, but for her son, who is now a teenager, and is learning by the self-care example she sets.

“Suffering in silence is a real thing,” says Nathman. “It doesn't just impact you — it impacts your family and it impacts society.”

According to women who have been there, the golden rule is if it feels too hard, it probably is.

And you need to ask for help.

More Like This
How To Breastfeed A Baby With A Cleft Lip Or Cleft Palate
21 Earthy Baby Girl Names For Your Little Force Of Nature
20 Perfectly Proper Tudor Baby Names
Can You Do Zumba While Pregnant? Experts Weigh In