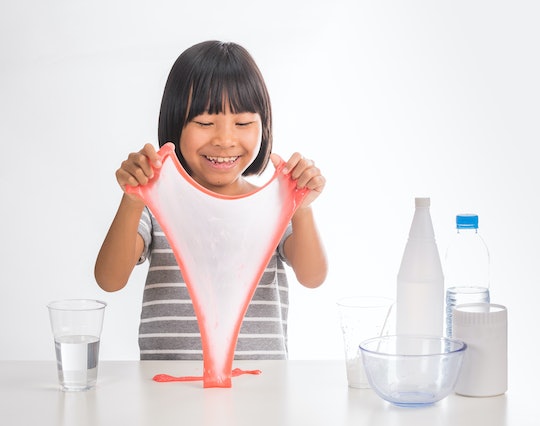 How To Make Slime Safe For Kids

Do you want to get your kids on the slime trend, but worried about the ingredients? Join the club. Many parents find themselves torn over wanting to encourage their budding scientists, but not wanting them to handle potentially dangerous ingredients. It's a legitimate concern and one not to take lightly. If you don't want your child exposed to certain additives in a slime recipe, you may be wondering how to make slime safe for kids. Turns out it's really easy to make slime that is safe and fun for virtually everyone.

The most common concern most people have lately is about the often-used slime ingredient Borax. The additive found in many DIY slime recipes is thought to have caused third degree burns on an 11-year-girl in Massachusetts, according to CBS News. Thankfully, there are many recipes online that don't include borax. One option is to make slime out of glue, food coloring, foaming face wash, baking soda, and contact solution. The step-by-step tutorial for the fluffy slime sans Borax can be found on YouTube by the makers Jelly Rainbow. There are also other simple and easy slime recipes that use laundry detergent, dish soap, and cornstarch all of which are without Borax.

Beyond the concern about Borax, there is also an additional safety concern for the younger set. Many older babies, toddlers, and even some preschoolers do what is called "mouthing." According to Parenting, babies mouth objects as a way of exploring with their senses. It's totally normal, but it brings some additional safety issues. That's not to say older babies and toddlers can't play with slime, as it can be a really fun sensory experience. You just probably don't want them ingesting anything remotely that resembles a chemical. Your best option for younger kids that put everything in their mouth is to try edible slime.

There are slime recipes online that are completely safe to eat and include such ingredients like Metamucil and Kool-Aid. According to the ThoughtCo website, there are even edible recipes that taste and smell good if you add a dab of flavoring like vanilla to it. A quick note here is that just because they're edible, that doesn't necessarily mean you should let your kid nosh on it for breakfast.

Homemade slime is a trend and fun activity that everyone can be apart of, but just like with anything, safety comes first. As a parent you'll be able to gauge the best recipes for your children in regards to their age and any possible allergies. If you're still not into making safe slime on your own, there are plenty of non-toxic slimes you can buy.